Audi creates diesel from air and water, Audi A8 prototype with ‘e-diesel’ to be produced soon

Audi, the German car manufacturer has supposedly made a new carbon-neutral diesel fuel for internal combustion engines, solely made from water, carbon dioxide and renewable energy sources. The new fuel has the capacity to make a big dent when it comes to climate change.

The company’s pilot plant, which is operated by German startup Sunfire in Dresden, produced its first batches of the “e-diesel” this month. It is said to pump out 160 litres of the synthetic diesel every day in the coming months. Johanna Wanka, German Federal Minister of Education and Research, has already used a few liters of the fuel in her work car, an Audi A8, to celebrate the feat.

The base fuel, which they are referring as ‘blue crude’ is created using a three-step process. The first step begins by taking electricity from renewable sources like wind, solar or hydropower and using it to produce hydrogen from water via reversible electrolysis.

The hydrogen is then mixed with carbon monoxide (CO), which is made from carbon dioxide (CO2) that has been harvested from the atmosphere. The two react at high temperatures and under pressure, which results in the production of the long-chain hydrocarbons – this is blue crude. Once it has been filtered, the resulting e-diesel can be mixed in with our current diesel fuel, or used on its own to power cars in a more continuous way. 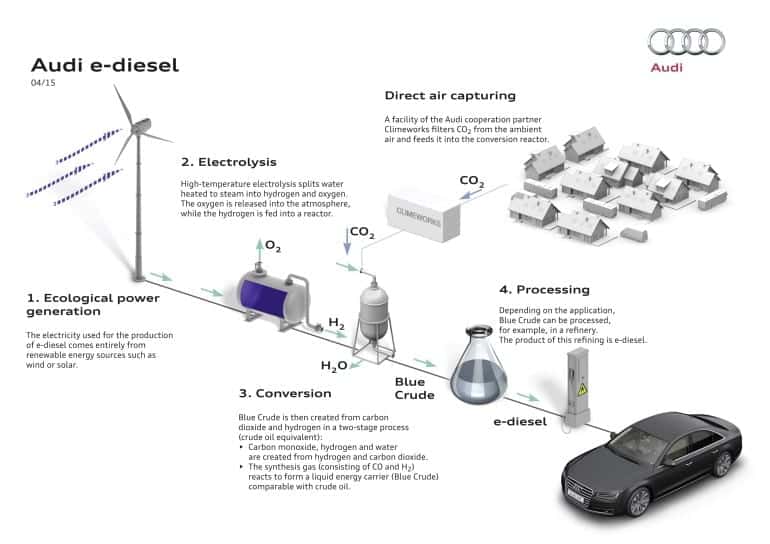 Audi says that currently the carbon dioxide used in the process is supplied by a biogas facility but, further addition to the green impacts of the process, some of the CO2 is taken directly from the ambient air, taking the greenhouse gas out of the atmosphere.

Sunfire analyses have shown that the synthetic fuel’s lack of sulphur and fossil-oil not only makes it more environmentally friendly, but also has superior combustion when compared to fossil fuels. The overall energy efficiency of the fuel creation process using e-diesel is 70 percent, according to Audi.

Sunfire Chief Technology Officer, Christian von Olshausen said in a press release that “The engine runs quieter and fewer pollutants are being created.”

The fuel can be mixed with conventional diesel fuel, as is mostly done with biodiesel fuels already.

The Dresden pilot plant is set to produce about 42 gallons (160 ltr) of synthetic diesel per day in the coming months. However, Audi and Sunfire now want to build a bigger factory.

“If we get the first sales order, we will be ready to commercialize our technology,” von Olshausen says.

Once the production is scaled up, Sunfire anticipates that the market price for the synthetic diesel could be between 1 and 1.50 Euros per liter, dependent on the cost of renewable electricity.

In Germany, with the traditional diesel currently on the market priced at 1.50 Euros per litre onwards, this would make the fuel extremely competitive, and perfectly positioned to make continuous travel available to everyone.