The new Google Doodle is packed with a cool Earth day quiz which tells users as to which animal they resemble!!

22nd April is celebrated as Earth Day in 192 countries across the world and this is coordinated by the Earth Day Network. The ‘Earth Day’ concept originated in 1970 when a huge crowd of 20 million Americans which was led by late Wisconsin Senator Gaylord Nelson began the environmental campaign with an aim of creating environmental awareness among the people.

In 1990, Senator Nelson was awarded the Presidential Medal of Freedom, by President Bill Clinton. This award is the highest honor that a U.S. civilian can receive and the award was presented in 1990 on the occasion of 20th year of Earth Day which was celebrated by organizing a very big campaign of about 200 million participants across the world.

Earth Day is being celebrated since then and today Google has come up with a new Google Doodle to mark the 45th Earth Day celebration wherein the 2nd ‘O’ alphabet has been replaced by spinning planet Earth and the other individual alphabets includes various different animations of a variety of animals. Further, the enthusiastic Google Doodle team have come up with an innovative quiz which tells user “which animal are you?” The team also asserts that the quiz tells users which animal they resemble and this is 100% scientific and accurate. The thoughtful team has further linked the different animals to Wikipedia wherein users can learn more about the animal that they resemble deep within!

People across the world celebrate this day by engaging themselves in various environmental programs which includes the ‘cleanup drives’, removal of ‘beach litter’, ‘field trips’ wherein students go to park and get closer to nature. In New York the volunteers have organized for “Earth Day 5K Walk & Green Tour” to mark the Earth Day 2015. 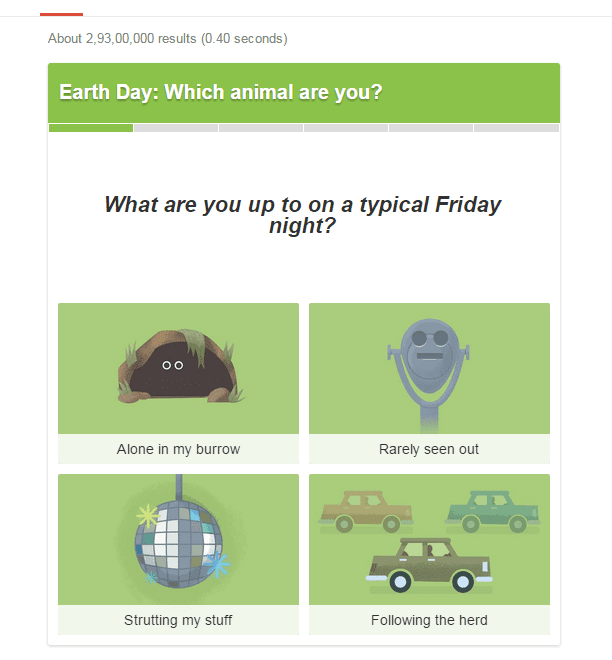 For now, what readers can do is check the new Google Doodle Earth Day quiz and try to find out which animal they resemble…….whether they resemble a “Pangolin” or a “Giant Squid” or any other animal!!