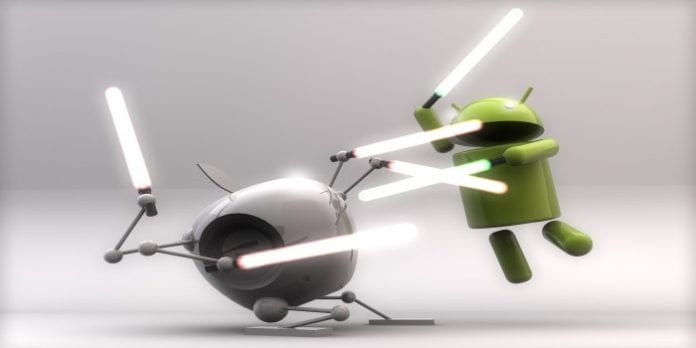 In our times we would fight over the best film star we liked but now a days technology is the buzzword for gen next. So much so that the Android versus iPhone fights can be seen on online forums as well as websites where each one owning allegiance to a particular brand of smartphone tries to get on top of other. Online fighting is fine but when the fight gets physical, it gets more violent, bloody and dirty.

This happened in Tulsa, Oklahoma in United States. Two roommates who were living together go into a violent fight to prove which smartphone was superior, Android or iPhone.

When the Tulsa police arrived at the fight scene on Friday morning they found a man had been bludgeoned with a broken beer bottle. The police had been called after neighbours noticed that a young man was stumbling in the parking lot of the building with a bloody nose and shirt.

According to ABC’s Tulsa 8 news the injured man was defending his favourite smartphone with his roommate. The fight started when both the roommates were having a beer party and got drunk. A remark from one of them about his smartphone brand being superior to the other ones brand apparently escalated to full blown fist fight. With the empty beer bottles lying around and the fact that they were drunk, the fight turned into one bloody night for one young man.

At least one of the men had a beer bottle smashed over his head, Tulsa 8 reports.

The police said that they are yet to determine whether to charge the two men for their fist fight over a inconsequential thing as an smartphone brand. Both were sent to a local hospital for the treatment of their injuries.