After the Spark now comes Play from the house of Micromax. After having broken all the price barriers with its Canvas Spark and launching it for Rs.4999.00, Micromax has now listed another price defying smartphone called Micromax Canvas Play for Rs.7490.00.

Surprisingly, the smartphone has been just released on the company’s website and shown as coming soon but is already listed on Ebay India. 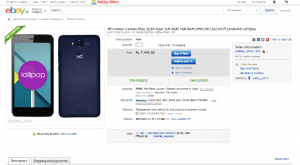 It will come with 8GB of inbuilt storage which can be expanded upto 32GB via microSD card. For creativity, Canvas Play  sports a 5MP fixed-focus rear camera with an LED flash and 0.3MP front-facing camera.

On the connectivity front, the Canvas Play offers 3G, GPRS/ EDGE, Wi-Fi 802.11 b/g/n, GPS, Micro-USB, and Bluetooth options.  For power, the Micromax Canvas Play has a 2820mAh battery onboard which Micromax claims will deliver up to 10 hours of talk time and up to 273 hours of standby time.

It will come with a dose of preloaded apps which include Askme, Chaatz, Clean Master, Hotstar, M! Games, M! live, News Hunt, PayTM, Quikr, and Snapdeal, among others. The Micromax Canvas Play is listed on eBay India.