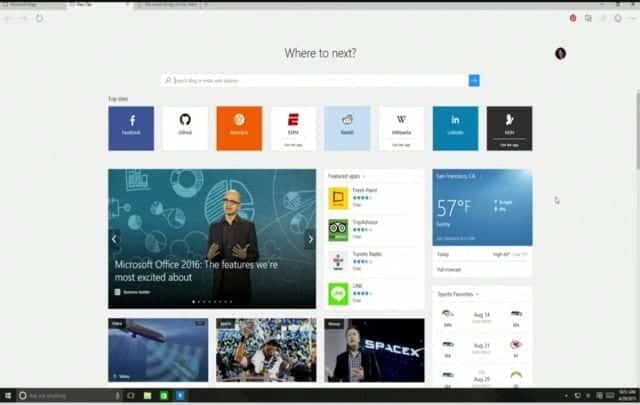 This was revealed by Joe Belfiore, Corporate VP at Microsoft’s Build 2015. “Microsoft Edge is the browser built for Windows 10, and it will be available on the widest range of Windows 10 devices,” he said.

Microsoft Edge prepares to take on Google Chrome, Mozilla Firefox and Apple Safari in the battle for browsers. Internet Explorer had been losing faithfuls in droves due to its inherent vulnerabilities, weaknesses, lack of extensions and generally un-user friendly nature.

Microsoft Edge comes with new features like a built-in annotation tool and a reading mode pretty similar to what Apple’s Safari. It will also support from Cortana, Microsoft’s voice-assistant. Realising the need of today Internet users, Microsoft has added in-built sharing for social media onto Edge. On the whole, Microsoft has kept the UI and design of Edge very minimal and simplistic.

The name Edge comes from the EdgeHtml the new rendering engine that Microsoft is using for the browser. This will be the default browser for consumers in Windows 10, although enterprise users will still get the option of using Internet Explorer.

Microsoft has been seriously giving Microsoft Edge the best of the browser features before its impending launch in the Windows 10 final build for commercial users. It had announced a $15000 bug bounty to researchers and hackers for finding bugs in the Project Spartan, as it was known then, before its launch.