According to the Italian site iSpazio, it has been reported that a few customers experienced skin rashes after wearing the Apple Watch. Well, the news doesn’t come as a surprise, considering there are some people are sensitive to the materials that the various bands are made of.

For example, take the case of the leading fitness tracker maker Fitbit when it was made to recall one of its high-tech wristbands, the Fitbit Force, from the market. The reason? Some customers started complaining about skin irritation when wearing the wristband – which was not reported with its predecessor, the Fitbit Flex. 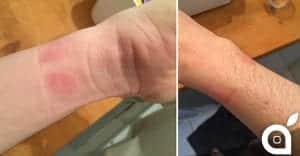 It seems like the giants of the industry are followed by the curse of the wrist-bound irritation like the plague. For example, a reddit user, Maserrano reported of contact dermatitis due to the fluoroelastomer band/sport watch a few days ago:

“Has anyone else suffered skin irritation because of the band/watch? I don’t wear mine too tightly, and I make sure it doesn’t stay wet in there after workouts, but I’m definitely dealing with an allergic reaction of some kind. I just got off of the phone with an Apple rep, who took information from me for about 20 minutes, including photos of the irritation and a medical history (all of this voluntary, at least partially for research purposes).”

Remarkably, Apple has already addressed the fact that some users may be allergic to the material it uses. According to Apple

“A great deal of care and research go into choosing materials for all our devices. In addition to ensuring that all materials adhere to existing regulations, we developed our own specification for Apple Watch that goes beyond those requirements. In fact, every material that touches your skin has gone through extensive evaluation in accordance with our specification.”

However, a small section of people may experience reactions to certain materials due to allergies, continuous exposure to irritants like soap or sweat, environmental factors and other causes. Word of caution for people who have allergies or other sensitivities, Apple Watch and some of its bands contain Nickel and Methacrylates.

Nickel can create problem for some users, but Apple says the levels found in the Watch fall below the strict nickel restrictions set by European REACH regulation. Therefore, while being exposed to nickel is not likely to be a problem, those who are more sensitive will probably see some side effects.

Further, Apple cautions about the methacrylates (which is found in the adhesive used in Band Aids). The Apple Watch case, the Milanese Loop, the Modern Buckle, and the Leather Loop have trace amounts of methacrylate from adhesives. However, the company states that none of the parts of the Apple Watch containing methacrylate is in contact with the users’ skin. But, people who are sensitive may develop sensitivities over time. In that case, it is advisable to keep away from it.

Lastly, the tech giant says that another possible reason for the rash may be you are wearing the band too tightly or too loosely. A tight band can cause irritation while an overly loose band could cause rubbing. Apple warns that if you are experiencing any sort of allergic reaction, then you should consult a physician before putting the wearable band back on your wrist.