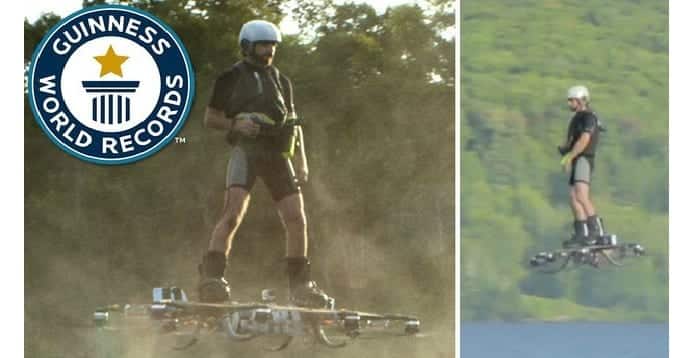 It is almost impossible to believe that a real life Hoverboard exists, a Montrealer proved it is possible by inventing his own device and setting a new world record for the flight.

Catalina Alexandru Duru, a Canadian has set an amazing world record by hovering across the Canadian lake on his self invented Hoverboard for a distance of almost 300 meters. This record has been confirmed by the Guinness World Record organization to be  “astonishing world record”.

The Hoverboard craze had begun with Back to The Future II movie, however in the movie the Hoverboard was not able to work on water; on the other hand Duru’s Hoverboard can work on any terrain as told by Duru.

The attached footage shows Duru rising 16 feet in the air and then flying forward to almost 905 feet and 2 inches over the Canadian lake. Duru had to travel more than 50 meters to set the record and he actually traveled a distance of 275.9 meters which is almost 5 times the required distance.

Duru told the Guinness team: “I wanted to showcase that a stable flight can be achieved on a hoverboard and a human could stand and control with their feet.” He also added: “The prototype can be used anywhere but is usually tested over water because of how dangerously high it can fly.”

Duru had set the record on August 24th 2014, over Quebec’s Lake Oureau however the video was released on Friday because not much is known about this hovering overboard, as per the video it seems to be some propellor based quadcopter system.

The  farthest distance covered by Duru’s Hoverboard during the record breaking flight was 275.9 meters (905.2 feet) at a height of five meters.

Cnet has further confirmed the authenticity of this record and the footage from the Guinness World Record team members.

Click here to watch the footage of this remarkable Hoverboard flight: