Unknown to you, Hollywood is making money based on your tweets, comments, posts and likes

This Sunday you watched the current blockbuster, Vin Diesel’s Furious 7 and immediately took to Twitter to give your two cents about the movie. Unknown to you, some obscure firm is downloading all your tweets about movies and collating them into a database for Hollywood producers and studios.

It is found that  an estimated 56% of movie-going Twitter users use Twitter to rant and rave about a film, its actor and actresses and this is manna from heavens for the producers and studios.

Over the past few years, many companies are engaged in the media research business for these producers and studios. These companies tune into all the social media network and gather information on how people perceive movies and their stars. In a multi-billion dollar industry, where production budgets including the marketing budget can be as high as $200 million per film, such data, if harnessed can turn a super dud film into a blockbuster.

Fizziology is one such social media research firm which provides studios with reports sourced from online sentiments. “We have over 2 billion social media feeds related to media and entertainment in our data warehouse,” explains Ben Carlson , cofounder of the Indianapolis, IN-based company which has built software that plugs into Twitter, Facebook, Tumblr, Instagram and blogs to follow conversations about movies.

Fizziology gathers data from Facebook reviews, comments and rants, tweets, and GIFs of an actress posted to Tumblr. This data is then selectively filtered by one of Fizziology’s 12 full-time employees or various freelancers.  Then, that data is packaged into reports provided to studios for a fee which Fizziology would not disclose. 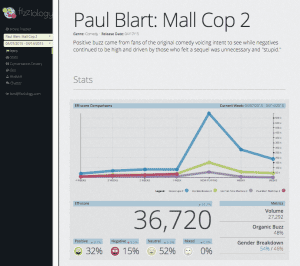 “We’re going to be working on 70% of the major releases coming out in 2015,” Carlson said, before noting that is a 20% increase over their 2014 reach. “We don’t work with every studio and every movie, but we work with most studios and most of their movies.”

Fizziology and many such other firms are always on a lookout for the tweet, like, review on the Internet so that producers can understand, you, the film viewer better and produce films which interest you and earn them bigger profits.

So next time you tweet, rave and rant about a movie, its actors and how you liked it or disliked it, remember that someone is tracking all your posts.