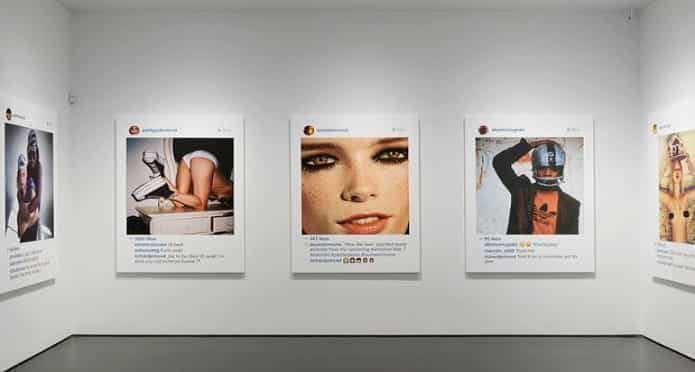 Richard Prince, the controversial appropriation artist is at it yet once again. Richard Prince, an “artist” whose skill set consists of photographing other people’s photographs, alter them slightly, and then sell them for huge profit. It may sound very strange or unusual, but Prince has been making a living doing just that for decades now.

Richard Prince’s “New Portraits,” art show consisted of photos from the Instagram accounts of models, various celebrities (mostly females), and other professionally beautiful people, which were taken without permission or notice from Instagram. These artwork was shown by Prince at the Gagosian Gallery in New York City. The inclusion of these pictures in the gallery’s sprawling booth at Frieze New York were reportedly being sold up to $100,000.

The case has not only led to strong reaction of anger from photographers, but also raised questions on copyright infringement that have dominated the dialogue surrounding them on sites including Instagram, PetaPixel, Snapchat and Business Insider.

It is said that Prince picks up the photographs directly from the Instagram pages of his subjects, appropriates them as his own and then sells them for six figures. He hasn’t made a perfect exact copy of the original photos—he adds his own comment, takes a screenshot of the photo and comments, and blows it up to fit a large canvas.

A woman named Doe Deere, who discovered her own picture up for sale in the Gagosian Gallery near Central Park has expressed that she did not give permission to Prince to use her photo and likeness.

“Yes, my portrait is currently displayed at the Frieze Gallery in NYC,” model and cosmetics entrepreneur Doe Deere wrote on Instagram last week. A portrait of her was presented at Frieze New York with her powder blue dyed hair holding a doll with similar powder blue-colored hair. “Yes, it’s just a screenshot (not a painting). No, I did not give my permission and yes, the controversial artist Richard Prince put it up anyway. It’s already sold ($90K I’ve been told) during the VIP preview. No, I’m not gonna go after him. And nope, I have no idea who ended up with it!”

Deere tagged the post #lifeisstrange #modernart #wannabuyaninstagrampicture. Unfortunately, Deere herself has received criticism for allegedly repackaging beauty products from other brands and selling them at a higher price under the brand Lime Crime. Despite complaints from multiple customers that their credit card information has been stolen after placing an order from the brand’s website, the brand still has developed a cult following. In 2011, photographer Patrick Cariou had sued Prince after finding that he essentially stole Cariou’s photos, made the slightest of adjustments, and ended up displaying these images in the gallery at $10 million. However, in 2013, Prince won the lawsuit in the United States Court of Appeals against photographer Patrick Cariou over his “Canal Zone” series, where several of Cariou’s Panamanian landscape photographs and portraits of Rastafarians were modified by Prince. The judge ruled that all but five of the works changed the original matter enough that they were “transformative” and did not constitute infringement.

Prince’s win in the year 2013 was precedent-setting. It is worth noting that the images in “New Portraits” seem to be altered much less significantly by Prince than those used in “Canal Zone”. In such case, why wouldn’t he continue to push his luck especially when he can get paid for it.

The legality of Princes’ use of the Instagram images remains a matter of speculation until someone stands up and takes him to court. Of course, he could always get forced to leave Instagram.