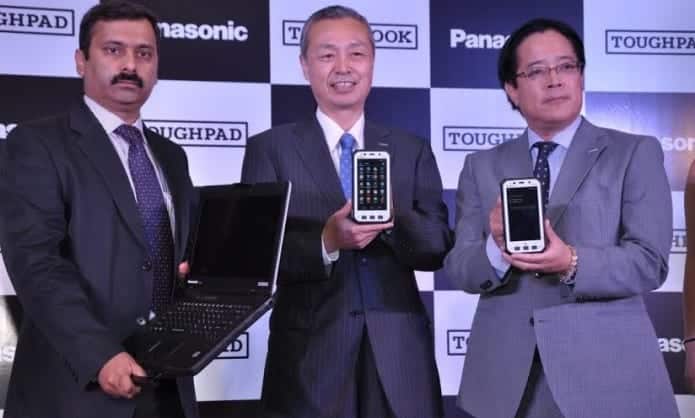 In order to strengthen its ToughBook and Toughpad range of rugged notebooks and tablets, Panasonic has launched three new products in the Indian market. The company aims to seize 65 percent of the market share by the end of 2015/16 in the rugged IT device category claiming to be the biggest player in this segment. Panasonic has launched Toughbook CF-54 along with ToughPad FZ-E1 and FZ-X1.

Gunjan Sachdev, National Business Head – ToughBook, Panasonic India said “The launch of these products will certainly enhance our portfolio catering to the enterprise segment. With the broadest range and configuration options available in their class, industry leading reliability and enterprise grade feature sets, the ToughPad FZ-E1 and ToughPad FZ-X1 are ideal tools for a host of usage scenarios in the industry.”

The ToughPad FZ-E1 is powered by Windows Embedded 8.1 and will be available at Rs. 119,000. On the other hand, the ToughPad FZ-X1 runs on Android 4.2.2 Jelly Bean and will be available at Rs. 109,000. These tablets meet the MIL-STD-810G standard, feature an IP65/IP68 rating for dust and water resistance certified, and can withstand a drop from up to 10 feet on concrete.

The specification for the remaining of the new Panasonic Toughpads are similar in every detail. Both feature a 5-inch HD (1280×720 pixels) display. They are packed by a 6200mAh battery coupled with 2GB of RAM. These tablets come with 32GB of built-in storage capacity which supports expandable storage via microSD card. They sport an 8-megapixel rear camera with flash and a 1.3-megapixel front-facing camera. On the connectivity front, they supports 3G, 4G LTE, Bluetooth, Wi-Fi, HDMI and GPS.

The company has also launched the ToughBook CF-54, touted as the thinnest and lightest semi-rugged PC in its category and costing Rs.139,000. The company claims it to be a high-end rugged notebook, which is 50 per cent thinner and 25 per cent lighter than the outgoing CF-53 model. It is powered by the new 5th generation Intel Core i5-5300U vPro processor clocked up to 2.9GHz. Since it is not sealed in, it also has a hot swappable battery. Panasonic claims of up to 11 hours of battery backup, which means it is very close to the 13-inch MacBook Air in this area.

Toru Hasegawa, Divisional Managing Director, Solutions Division, Panasonic India, said, “With the industry moving towards unification of enterprise and carrier networks, we are offering all-inclusive solutions to different market segments. The new products build on the legacy of nearly two decades of rugged devices from Panasonic to accomplish the mission of professionals in the most demanding work environments. With this launch, we are looking at increasing our presence in the Rugged IT devices segment from an existing 60 per cent to almost 65 per cent.”

The company currently has a wide range of devices featuring this segment starting from Rs. 89,000 and going up to Rs 230,000.