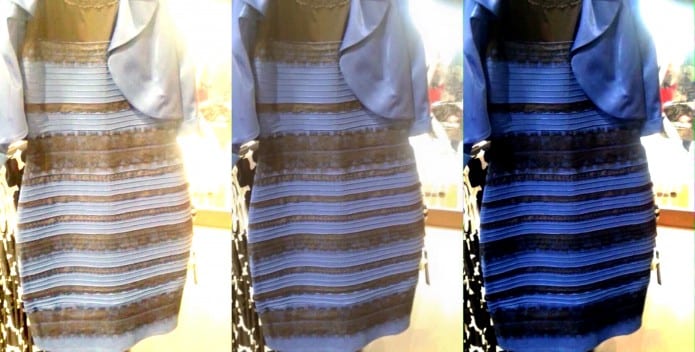 The Dress, a viral brain teaser that broke the Internet has finally been solved by scientists

On the evening of 26th February 2015, an image suddenly caught attention of thousands of viewers on the social networking site Tumblr. What was so special about this dress? Well, the dispute was regarding its actual color!

Within a week the photo had reached out to Twitter, another social networking site and had received a colossal response of about 10 million tweets. People from across the world were eagerly giving their opinion regarding the color of this dress and eventually based on their opinions three groups were formed namely #blackandblue, #whiteandgold and a smaller #blueandbrown.

Originally the dress was worn by the bride’s mother, during the wedding of a Scottish couple Grace and Keir Johnston. It seems she had sent the photograph of this dress that she had planned to wear on the day of wedding to her daughter and the color difference was first marked by this couple. They later shared #TheDress on social media networking sites like Tumblr, Facebook, Twitter and then it just went viral.

The original photo posted on the Tumblr was made up of blue and black colored pixels!!

A big question which arises here is that then why did people see the dress in a variety of colors.

Scientists have finally unraveled the mystery of #TheDress.

Scientists believe that this is an excellent example to understand the mechanism of  how human brain filters light and differentiates the color perception.

A recent study was conducted by scientists on a group of 1,400 individuals to understand how they perceive the color of this dress and based on the result this group was categorized into the 3 segments #blackandblue, #whiteandgold and a smaller #blueandbrown. The result was stunning because 57% reported the color to be #blackandblue, 30% saw it as #whiteandgold and about 10% reported it to be #blueandbrown. A major chunk of older generations reported the dress to be #whiteandgold.

According to US neuroscientists, Dr Bevil Conway and Jay Neitz, from the Massachusetts Institute of Technology, the various differences of opinion regarding the dress was majorly because of how the human mind perceived the color and its correlation with the Chromatic adaptation.

Chromatic adaption is one aspect of vision wherein a human brain can be fooled into observing a color-based optical illusion under different optical variations and still the object would appear as the same color illusion.

Dr Conway further believes that it all depends on how the human brain processes various hues of a daylight. He further feels that people who voted for #whiteandgold are more attuned to daylight and those who voted for #blackandblue are the ones who are accustomed to indoor lighting. So basically it all depends on whether the brain perceives the artificial “indoor” or the natural “outdoor” light.

In case of the smaller third category #blueandbrown, these individuals are accustomed to both indoor as well as the outdoor lighting.

While speaking to Herald Sun, Dr Conway said: “The big open question is what causes these differences in the population”.

He added: “One framework for understanding why you get these variations is to consider how light is contaminated by outside illumination, such as a blue sky or incandescent light. Your visual system has to decide whether it gets rid of shorter, bluer wavelengths of light, or the longer, redder wavelengths, and that decision may change how you see #TheDress.”

The study also revealed that the older people voted for #whiteandgold while the younger generation reported #blackandblue.

Hence, Dr Conway further concluded that color perception varies with the age and sex of an individual.

Based on the study conducted to address The Dress enigma, the research papers were published in the journal Current Biology. Dr Conway’s paper was one among the three papers that were submitted.

The second team who also published their conclusions regarding the color of the dress was a team of psychologists from the University of Bradford in UK and Giessen in Germany. According to these researchers, the color confusion probably arises due to the effect of brightness and “daylight locus”. As per scientists “daylight locus” is a set of chromatic phases of the daylight from yellow to blue.

A team of US scientists that was led by Dr Michael Webster from the University of Nevada co-related The Dress phenomena to visual evolution in presence of natural lighting.  This was the third team that was engaged in the study.

Wonder, if Grace’s mother had ever in her rarest dreams thought that the dress she had chosen for her daughter’s wedding would get so much attention across the world to the extent that it has stirred the entire scientific world resulting into publishing The Dress enigma!!!