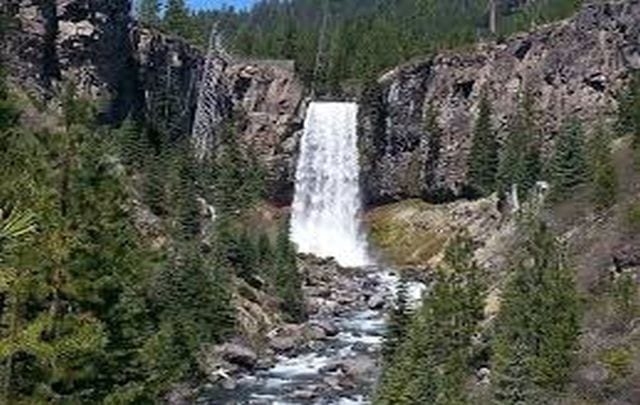 Sometimes viral posts on social media do benefit! This was noticed when on Saturday, Brett Nelson along with his friend was hiking along the Tumalo Falls Trail outside Bend. Suddenly he witnessed a trio that was engaged in vandalism at a scenic location. Nelson was shocked to see two children who were busy carving their names into the metal railing.

Nelson confronted the trio and requested them to stop this vandalism, the kids continued their act and their dad supported them in this act of vandalism as he did not think that his kids were doing wrong!

During his confrontation, Nelson also understood that the trio belonged to California and they had reached Oregon via a rental car.

On Monday, Nelson told KGW: “All I was trying to do was ask someone to stop doing something, and the reaction was completely opposite of what I thought would occur.”

Nelson was very annoyed with the trio and he just captured this act of vandalism and decided to share his outrage through his Facebook page. Soon Nelson uploaded the picture of the trio and mentioned the following in his post: “PROUD parent letting children carve names in Tumalo Falls hand railing… I stated, you know you are letting your kids deface federal public land? How is this OK???”

Nelson hopes that the Californians should never come back to Oregon. His emotions reflect in below words as per his Facebook post: “I stated – you need to go back to California, Oregonians take huge pride in our land in our public land parks and you are not welcome SHAME ON YOU!!!”

Within a couple of days the post had more than 52,000 shares on Facebook and it was successful in getting the attention of U.S. Forest service as well.

Kassidy Kern, public affair specialist for Deschutes National Forest said: “Public lands matter to all of us and we are all responsible to take action. It’s great that Brett felt safe enough to do this, to confront them. We take this very seriously”

An investigation has already been launched by the Forest Service. Kern further confirmed they have been able to find the “carvings” at the location mentioned by Nelson and have taken the photographs of the same as evidence. All thanks to Nelson, it has become easy for the Forest Service officials to identify the vandals and they already have evidence against the trio.

As per law, Vandalizing a public park or a natural resource is punishable with a fine of up to $ 5,000 or even six months imprisonment.

Kern said: “Metal rail or not, this is still considered the property of the United States.”

He also appreciated Nelson’s efforts to bring this vandalism to the notice of the officials. Kern added: “Kudos to (Brett Nelson) for bringing this to our attention.”

Kern also mentioned : “It’s unlikely we would go after the juveniles, but the father could be charged.”

Most of the people have supported Nelson in his outrage, few think that the kids are not to be blamed as it is the dad who is responsible for them. Nelson too feels that it is dad who needs to be held responsible for the vandalism, he added :”To me it was, ‘What kind of message are you sending your children?’ It’s mind boggling as to the mindset of a parent. You know, you coach by example, you lead by example, you parent by example.” He also added “It was inconceivable really.”

Nelson’s outrage over the vandalism at the Oregon park has truly been able to strike a chord on the social media and definitely has encouraged people to be aware of the vandals around the heritage properties. Who says viral posts are just for fun.