Microsoft has recently started to prompt Windows 7 and Windows 8 users about the showing the capacity it has to upgrade to Windows 10, giving us an insight as to how the upgrade process may work.

The prompt which in sync with an earlier report points out that this free upgrade will be a limited time offer. It further asserts that if users don’t claim the free upgrade within a year, the offer will be cancelled and they will have to pay for the upgrade.

The soon-to-be-released Microsoft Windows 10, even though not yet completed is already pretty good; however, it still has bugs in it causing it to freeze up from time to time. It is expected to be released in late July, if it’s completed in a month or so from now and Windows 10 is almost undoubtedly going to be very good indeed. 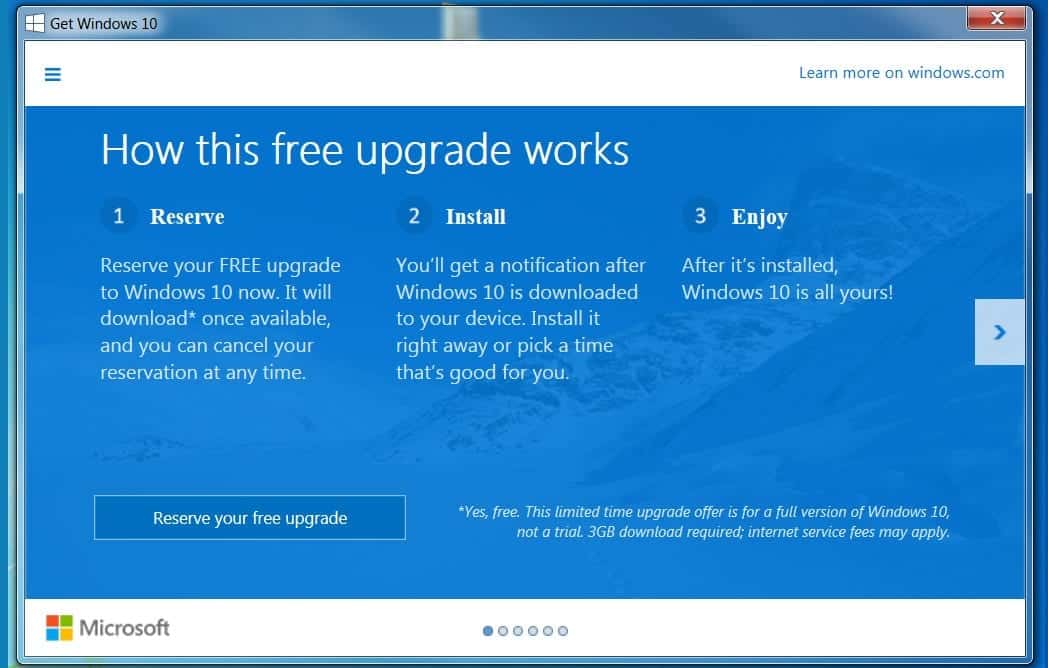 Windows 10 is set to replace Microsoft Windows 8. As far as the Windows 8 goes, it hasn’t been able to set a very high bar for itself so much so that even an unfinished software that crashes and involves hours of work is preferable. Also, one should have paid attention to Microsoft’s advice and held onto launching Windows 8 a bit longer before it was made public.

If you have a touch-screen device, Windows 10 will have the charm bar gesture on the edge of the screen that will slide from right-to-left for notifications and settings bar, similar to what one would find on a mobile phone. Windows 10 has started to share these features with mobile phone operating systems, as Microsoft plans to operate more or less universally, irrespective of whether one is using a notebook PC, mobile phone or tablet.

Further, let’s take a look at “Settings”. With every new build, more and more are getting fashioned differently in the universal style, which is created to work just the same with your finger touch on the screen as well as with a keyboard and mouse.

With every build, the start menus and the task bar, too, are getting better where many features are work exactly the same way you expect them to when you click on them.

For example, when you click on the date and time on the task bar of Windows 10, a big friendly calendar pops up, exactly the way you always wanted that click to do. It seems like Microsoft has been listening to its customers and is allowing us take a decision as to how things should operate on its Windows 10.

However, it looks like Microsoft has been exactly doing this for some time. A major reason of these Windows 10 builds is to let Microsoft observe how people do things and make the final product to match, irrespective of how much damaged the Windows 10 maybe.

Microsoft is paying keen attention as to why a feature is not clicked and if it is clicked why people are coming out of that feature. It’s becoming increasingly obvious that Windows 10 is going to be an operating system for the people with every passing build.

Windows 10 Professional was recently priced at $150 on Newegg’s website. Once the users book their free copy, they will be notified later on when the update is ready for download. Once that’s done, the Windows 10 will be ready for use.