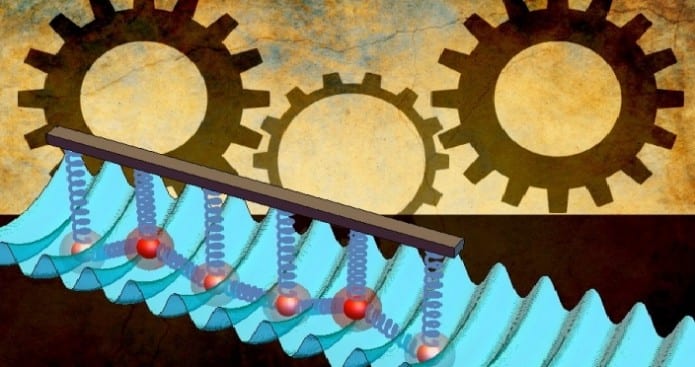 Scientists have come up with a method that can create surfaces which can move smoothly past each other with almost no friction. This findings of theirs could create new opportunities for engineering in nanotechnology and other areas.

Anywhere where there is movement on Earth, friction is present, and this can affect objects in a lot of ways. It causes heat, that is why when people rub their hands together they warm up. Friction can also down object, for example, car brakes use friction to reduce speed. This leads to general wear and tear, which is why drivers have to replace their tires and brake pad very often.

According to Vladan Vuletic, a professor of physics at the Massachusetts Institute of Technology, every time the tires spin one full revolution, they lose about one layer of atoms.

Friction between objects on the tiniest “nano” level can also cause engineering problems. Very small objects made up of far fewer atoms have fewer atoms they can manage to lose. Nano machines compared to larger things are worn down or damaged much more faster by friction.

One of the major challenges in nanotechnology is the creation and study of very small things that are not visible to the naked eye. It is hoped that nanotechnology can bring about new devices that can do everything right from exploring space to fighting of diseases. However, one of the hindrances in making progress with nanotechnology is that such tiny objects, even in favorable conditions may not last too long.

Vuletic and his colleagues at MIT performed an imitation involving a laser-based surface called an “optical lattice,” and a second surface on an ion crystal made of a grid of charged atoms. The researchers were able to navigate around the atoms on the crystal, creating small spaces between some of them that made the surface of the crystal capable of rubbing against another surface without causing friction.

The outcome was a state called “superlubricity,” which is “a fancy word for no friction,” Vuletic told CNBC.

“There’s a big effort to understand friction and control it, because it’s one of the limiting factors for nanomachines, but there has been relatively little progress in actually controlling friction at any scale,” Vuletic said in a press release attached to the study. “What is new in our system is, for the first time on the atomic scale, we can see this transition from friction to superlubricity.”

Vuletic hopes that engineers can make use of his team’s findings to design devices that can maintain themselves by being nearly resistant to friction, as told to CNBC.

The team publishes its findings on Thursday in the journal Science.