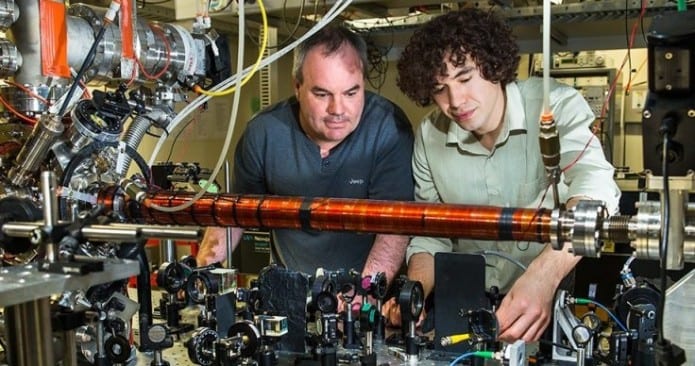 The weirdness of Quantum Theory has been confirmed once again by conducting the famous ‘John Wheeler’s delayed-choice thought experiment’.

Australian physicists re-conducted the famous  ‘John Wheeler’s delayed-choice thought experiment’ and once again confirmed the weirdness of Quantum Theory which proves that ‘reality does not exist until it is measured’.

Basically, the famous Wheeler’s delayed-choice experiment, comprises of a moving object which has the choice to either act like a particle or a wave, now the question here is that at what point would that particular object actually ‘decide’ its nature during the Quantum experiment?

Logical assumptions indicate that any object would either be wave-like or particle-like by its nature; totally independent of how it is measured. However, as per Quantum theory predictions, the resultant nature of the particle i.e. whether we observe a wave like behavior (due to interference) or particle behavior (in absence of interference) actually depends on how it has been measured towards the end of its journey. The physicists at the Australian National University (ANU) have found this very thing by re-conducting the famous Wheeler’s delayed-choice Quantum experiment.

Associate Professor, Andrew Truscott from the ANU Research School of Physics and Engineering said: “It proves that measurement is everything. At the quantum level, reality does not exist if you are not looking at it.”

The results of the experiment conducted confirmed the validity of the bizarre quantum theory, that governs the Quantum mechanics.

John Wheeler’s delayed-choice thought experiment was proposed in 1978 and the original concept comprised of light beams bounced by mirrors. The team of physicists at ANU succeeded in re-conducting this experiment which was thought to be impossible and further the physicists went a step ahead and carried out the experiment by using atoms that were scattered by laser light.

A thought experiment or Gedankenexperiment (term used by German physicist Albert Einstein) takes into consideration the hypothesis, theory or principle for the purpose of thinking through its consequences. Based on the experiment it could be possible or even not, to actually perform it. A common goal of a ‘thought experiment’ is to explore the potential consequences of the underlying principle in question.

Roman Khakimov, a PhD student at the Research School of Physics and Engineering said: “‘Quantum physics’ predictions about interference seem odd enough when applied to light, which seems more like a wave, but to have done the experiment with atoms, which are complicated things that have mass and interact with electric fields and so on, adds to the weirdness”.

During the initial stage of the experiment, Professor Truscott’s team trapped a collection of helium atoms in a suspended state which is known as Bose-Einstein condensate. Then these atoms were ejected until only a lone atom was left behind.

This single atom was then dropped through a pair of counter-propagating laser beams, that made a grating pattern which acted as a crossroad that would further scatter the path of the atom just the way a solid grating would scatter light.

Next, the physicists randomly added a second light grating to recombine the paths, after ensuring that the atom had already passed the first light grating.

The second grating was added only after confirming that the atom has passed through the first crossroads. Hence, this very fact suggests that the atom had not determined its nature until it was measured a second time.

Hence based on the results of the experiment, Truscott concluded that if we decide to believe that atom did take a particular path or paths then it is a clear indication that the future measurements definitely affects the past of that atom.

Trustcott further said: “The atoms did not travel from A to B. It was only when they were measured at the end of the journey that their wave-like or particle-like behavior was brought into existence”.

Though all this sounds very weird it is just a reconfirmation for the Quantum theory that is already governing the world of Quantum mechanics aka the world of the very small.

Using this theory scientists have been able to develop various technologies like LEDs, lasers, computer chips. However, until now it was difficult for the physicists to actually confirm that the Quantum theory does exist and works in reality, which has now been confirmed by the ANU team.

A detailed study of the experiment has been published in Nature Physics.