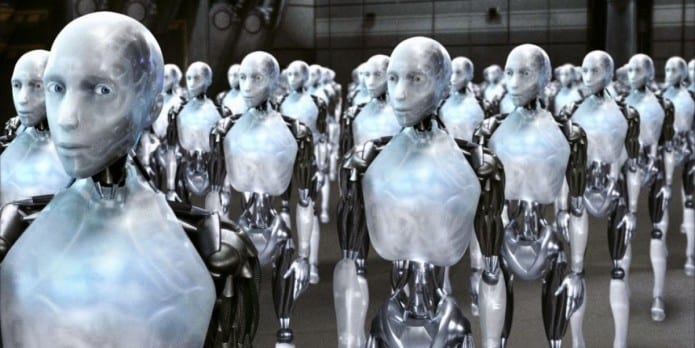 We will be pets to Robots says Steve Wozniak, Apple Founder

Steve Wozniak  feels advancement of Artificial Intelligence (AI) need not be viewed with skepticism, on the contrary robots taking over would be the ideal thing happening to human race.

When it comes to Artificial Intelligence (AI) most of the researchers have a very skeptical view and they feel that advancement of AI could pose an existential threat to human race.

Apple co-founder, Steve Wozniak, however has a totally different view regarding robots and AI.

Wozniak, expressed his views at the Freescale Technology Forum recently wherein he mentioned that growth of AI and robotics would result into a scenario wherein the machines will start taking care of humans by nurturing and protecting the human race.

While speaking to The Guardian, Wozniak also mentioned that: “They’re going to be smarter than us and if they’re smarter than us then they’ll realize they need us.” With this statement it was clear that Wozniak believes that robots and AI are not threats to human race; instead if AI takes over humans then the day is not far when ‘Robots will make humans their pets’.

He further added: “We want to be the family pet and be taken care of all the time. I got this idea a few years ago and so I started feeding my dog fillet steak and chicken every night because ‘do unto others’.”

This sudden change of mind as well as change of view has come as a big surprise from industry veteran Wozniak because earlier it was the same person who had considered the growth of AI and the resulting overly smart technology as ‘dangerous to humanity’.

Besides, Wozniak, Bill Gates is among one of the many business tycoons who warns of the danger posed by AI. Elon Musk, founder of Tesla, considers “growth of Artificial Intelligence as the ‘biggest threat’ to humanity” if it is not controlled and monitored properly.

During a Reddit Q&A held in January Bill Gates said: “I am in the camp that is concerned about Super Intelligence. I agree with Elon Musk and some others on this and don’t understand why some people are not concerned.”

Gates further added: “First, the machines will do a lot of jobs for us and not be super intelligent. That should be positive if we manage it well. A few decades after that, though, the intelligence is strong enough to be a concern.”

Earlier this year, Professor Stephen Hawking has also has expressed his concerns about self-learning machines.

As per reports, Musk wanted to keep an eye on the actions of an AI firm and hence has invested $10 million into the firm as he feels the advancement of AI is the “biggest existential threat” to human species.

Deep Mind Mustafa Suleyman, a co-founder of Google’s advanced AI company, believes that we are using the technology in the form of smartphones and computers and feels that the advanced AI is simply fabulous and has resulted into ‘production breakthroughs’.

Few panelists met at a round table conference, in May this year, with the goal of favoring the advancement of AI and dismissing the fear that AI will succeed replacing man-power in workplace and societies.

During the conference, CEO of lighting firm, Osram Innoventure, Timom Rupp said: “The more intelligent things we make that can take away acts of production, where we can improve efficiency, the better.” He added: “I think these things can take away basic mundane tasks, [but] they can never be creative. You will always need a human for this. So, if anything, the moves will change humans’ place and types of work.”

Wozniak feels that for AI to take over humans it will take at least “hundreds of years” and by then it will no longer pose threat to the ‘existence of human race’. On the contrary, Wozniak feels: “They’ll be so smart by then that they’ll know they have to keep nature, and humans are part of nature. I got over my fear that we’d be replaced by computers. They’re going to help us. We’re at least the gods originally.”

A team of researchers from University of Oxford had come up with a list of  reasons in February, 2015. The researchers stated that AI is existential threat to the entire “human race” and feel AIs possesses maximum potential to destroy human race. They had listed out 12 major risks which can threaten human race in the future.