The Hacking Team hack attack leaks continue to spill some interesting beans. A new find among the leaked emails is that the Hacking Team had managed to developed an Android app that could dynamically execute malware payloads. The App called BeNews could also escape the vigourous vetting checks of Google Play security team. 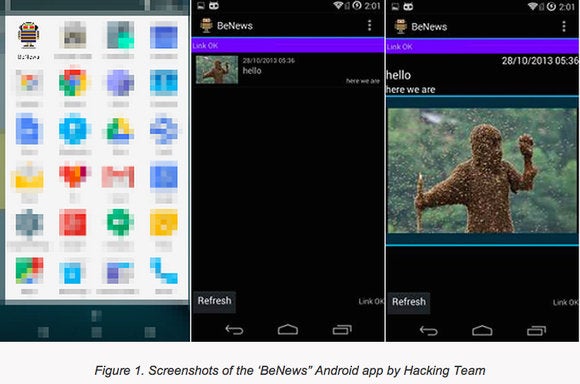 The app, BeNews, only requested three permissions from a user when installed, and was able to avoid Google’s automated app checks as no exploit was contained within its code. One the App was installed, its malicious payload would then snoop on the user and report his/her whereabouts back to the command and control server. This was reported by security research company Trend Micro Labs.

“The fake news app was downloaded up to 50 times before it was removed from Google Play on July 7,” Trend Micro said. “Looking into the app’s routines, we believe the app can circumvent Google Play restrictions by using dynamic loading technology.”

“Dynamic loading technology allows the app to download and execute a partial of code from the internet. It will not load the code while Google is verifying the app but will later push the code once the victim starts using it.”

Trend Micro said that Hacking Team than sold this App to its customers with instructions to take advantage of the app, and a Google Play account that they could use. The app uses a privilege escalation bug, CVE-2014-3153, found in Android 2.2 to 4.4.4.

“No other company has ever produced a lawful surveillance capability nearly as comprehensive, as easy to use, or as powerful as ours.”