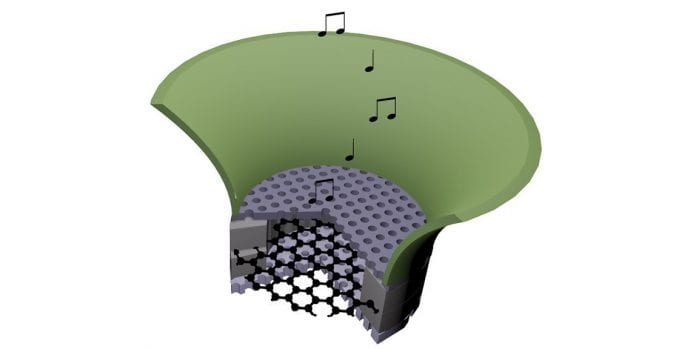 UC Berkeley researchers have developed an ultrasonic microphone to help humans communicate in the manner bats and dolphins do through ultrasonic waves.

The scientists have used graphene to build lightweight ultrasonic loudspeakers and microphones, enabling people to imitate and measure the distance and speed of objects around them.

The paper was authored by campus research professors Alex Zettl and Michael Crommie, and by researchers Qin Zhou, Jinglin Zheng and Seita Onishi. The study was funded in part by a U.S. Department of Energy contract, and by grants from the Office of Naval Research and the National Science Foundation. The Zettl and Crommie research groups have previously published studies on graphene.

Zhou said this mission was an extension of work done in the year 2013, when Zhou worked with Zettl to design a loudspeaker made from graphene with a frequency response of up to 20 kilohertz.

The researcher Alex Zettl said “Sea mammals and bats use high-frequency sound for echolocation and communication, but humans just haven’t fully exploited that before, in my opinion, because the technology has not been there”.

The study appears online in the Proceedings of the National Academy of Sciences. Speakers and microphones both use diaphragms, typically made of paper or plastic that vibrate to produce or detect sound, respectively.

The diaphragms in the new devices are graphene sheets a simple one atom thick that have the right combination of rigidity, strength and light weight to respond to frequencies ranging from subsonic (below 20 hertz) to ultrasonic (above 20 kilohertz).

Humans can hear from 20 hertz up to 20,000 hertz, while bats hear only in the kilohertz range, from nine to 200 kilohertz. The graphene loudspeakers and microphones operate from well below 20 hertz to over 500 kilohertz.

The structure of the speaker is almost same (to the old one),” Zhou said. “One thing we improved was the production. The other part is the circuit, which works as a loudspeaker.”

After creating the microphone and the loudspeaker, the researchers successfully conducted a field test at Del Valle Regional Park in Livermore, California. The test consisted of recording bat chirps — which had a frequency between 100 and 50 kilohertz and a duration of about 4 milliseconds — to test the efficiency of the devices, according to the paper.

The bat frequency sweeping or chirping represents a type of ultrasonic FM radio transmission, and its successful recording demonstrates the effectiveness of the graphene microphone as an ultrasonic radio receiver,” the paper said.

The researchers were also able to use the loudspeaker and the microphone to measure distances with great accuracy by exploiting interference between ultrasonic waves and electromagnetic ones.

More practically, the wireless ultrasound devices complement standard radio transmission using electromagnetic waves in areas where radio is unreasonable, such as underwater, but with far more reliability than current ultrasound or sonar devices.

They can also be used to correspond through objects, such as steel, that electromagnetic waves can’t penetrate.

“The microphone and loudspeaker are some of the adjoining devices to commercial feasibility, because we’ve worked out how to make the graphene and increase it, and it’s easy to level up,” Zettl said.

Waqas Khalid, NASA researcher and former member of the Zettl Research Group, said that graphene has excellent electrical, thermal and optical properties and is also used in sensors, biosensors, LEDs and bulbs.

Zhou said he is positive about future research and all the potential applications. “There are a lot of different possibilities,” he said.