Recently,a group of hackers named “The Impact Team” has hacked and exposed almost 37 million users on Ashley Madison. At least 60GB of data including emails, addresses, search history and messages were released on unencrypted files on the dark web, and has since been accessible by searchable databases making it easier for cheaters to get caught by their spouse. Now for making it even worse, blackmailers are utilising this database to blackmail victims for exposing and hence demanding Bitcoin payments from them.

According to security researcher Brian Krebs, criminals are threatening to expose users to their significant others, unless a payment of exactly 1.0000001 BTC ($232 USD) is paid into their bitcoin wallets. 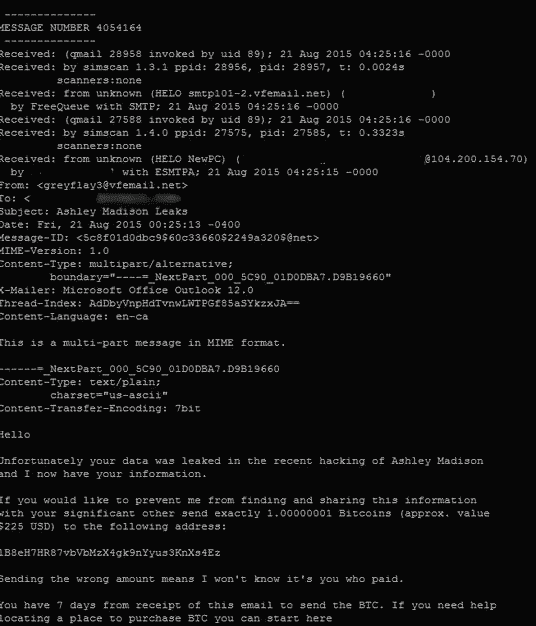 This particular extortionist has not been particularly successful, only receiving 0.0032 BTC since last Wednesday’s leaks.

Reports claim that someone may have actually killed himself as a result of the massive Ashley Madison hack that has resulted in user emails and other details getting leaked out and published on the Dark Web. Most of the exposed victims fall in the category of People in Power including Law Enforcement Officers. And this has been a time of high level of emotional stress to those people.

One of these committed suicide, though it was not confirmed that the reason was Ashley Madison Hack. But the timing of the incident and separate reports of hack victims threatening to kill themselves  makes it quite possible that the hack and the suicide are indeed connected.

Besides this, many Ashley Madison users have claimed that they have been blackmailed by individuals looking for Bitcoin income, as people are reportedly convincing users to pay them fairly large amounts of money not to have their membership in the adultery site revealed to their partners.  Elsewhere, a number of seedy websites and services have also cropped up, offering Ashley Madison members a chance to remove their data from the leaks, though this usually involves mere reputation management or vague promises of tracking names down and removing them. Most of these services may be scams just making the opportunity count.