Stagefright vulnerability:  How to check if your Android device is affected and remedies to tackle this exploit.

It’s been some weeks since Zimperium, a security company, discovered some six plus one critical vulnerabilities in the native media playback engine called  ‘Stagefright’. According, to the security researcher, Joshua Drake, these weaknesses should be termed as ‘Mother of all Android Vulnerabilities’.

It is indeed a big question if one wants to find out if their device has already been affected and if yes, what should be their next step. Suppose, the device is safe, how can one protect the device against this attack. This article will briefly explain all these queries.

What is Stagefright attack?

Basically, Stagefright vulnerability is a sort of weakness which can be exploited by the attackers to take over an Android smartphone by executing malicious codes which would be embedded in a video that is either sent through MMS messages or Google Hangout chat. When user opens this video, the malicious code gets triggered and can infect the device.

Stagefright vulnerability is definitely one of the biggest security concerns to Android because it can be automatically delivered through MMS which allows attacker to remotely control and steal data from the device. Stagefright mostly affects the devices that runs on Android Jelly Bean or its earlier versions. It has been observed that almost 40 percent of overall Android users use  KitKat, Jelly Bean or earlier versions.

The problem here is that ASLR technology is not foolproof and it is susceptible to the various nefarious attempts of the attackers to circumvent this protection level. It has already been proved by researchers that Stagefright can be triggered through apps and URLs.

The good news here is that if attackers attempt attack via URL or app, it is possible to avoid it, because one needs to manually retrieve the videos; however in case of MMS the video gets retrieved automatically which is very much dangerous.

Let us understand how to make out if the device has already been attacked by Stagefright?

There are two apps which users can download. These apps will tell user if their phone has been attacked by Stagefright. 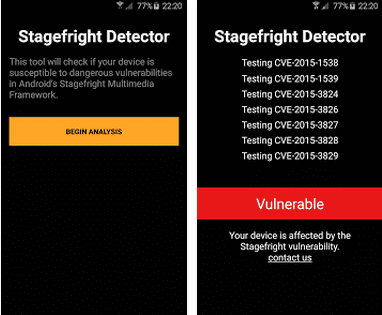 This app has been developed by  Zimperium Inc. This tool detects if the Android device is susceptible to the dangerous vulnerabilities in Android’s Stagefright Multimedia framework. It also detects if there is any need to update your mobile Operating System. 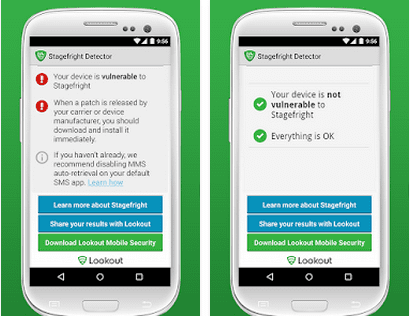 The vulnerability can be fixed only when Google releases the patch through System Updates which can be delivered via the manufacturer of the device or carrier. Users can check if a patch is available for their device by going to Settings and clicking the System Update button.

Basically, both the Stagefright Detector apps scan the Android device to determine if the device has been affected already and if yes, then they provide the user with advice on how to protect the device and its data.  For instance, user can install any patch from their carrier or OEM and disable MMS auto fetch in the device’s default messaging app until the device has been patched.

Well, there is not much that an user can do to stop the Stagefright attack. For now, the sole option is to get into the settings of Messaging app and Turn Off the auto-retrieve mode for MMS and this setting holds good for default Messaging app as well as apps like Hangouts.

The avoid being exploited by this vulnerability, Android users need to avoid opening any MMS message or any messages and links from any unknown users.

Android smartphones that are getting the Stagefright patch

Several manufacturers have also assured their users that they will issue the Stagefright patch and others will also start releasing the monthly security patches. Enlisted are some of the companies which have either already made an announcement to release the patch or have confirmed the update, it also contains the models which will receive the patch.

Google Stagefright patch: The very first one to announce the Stagefright fix was Google. Android One devices have already been patched and Nexus line of devices, too, would receive the patches and monthly security updates.

Samsung Stagefright patch: Samsung has also issued a statement about the Stagefright patch and monthly security updates for its popular devices. Sprint and AT&T too have announced to push the patch out for Samsung devices. Though Galaxy S4 and Galaxy S3 are still on the ‘to-do’ list for the patch.

Motorola Stagefright patch: Motorola too has joined the group and announced to patch its devices, which comprises a big list of devices.

LG Stagefright patch : It seems LG has confirmed to Wired that it would provide the updates to its users along with monthly security patches; however it has not made any official statement.

HTC Stagefright patch : HTC has already pushed the patch to several devices though it has not promised any monthly security updates.

Sony Stagefright patch : Similar to HTC and LG, Sony has not made any official statement regarding the patch; however it seems it has issued the patch to few of its devices.

Readers, hope this article has answered some of your questions. Stay tuned for more news regarding Stagefright attack.