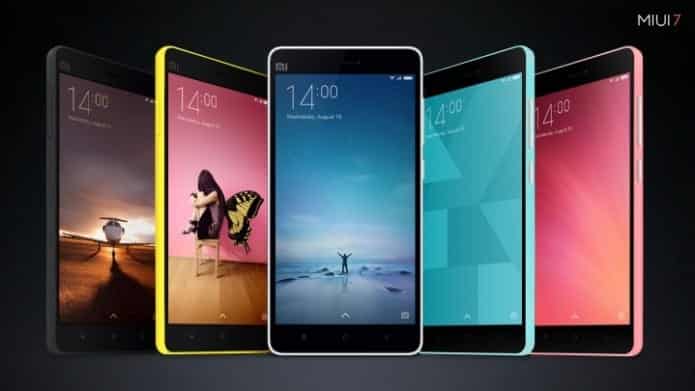 Xiaomi, the Chinese smartphone maker today announced the global version of its Android-based MIUI 7 operating system in New Delhi that will bring several new features, interface tweaks and performance improvements. The beta update will start rolling out on Monday. Alongside, the company has also announced limited edition of its Mi4i in special colours – pink, yellow, sky and black colours – that will start selling from August 25.

Here’s a quick run-down of some of the notable features in the MIUI 7 OS:

The MIUI 7 is based on Android 5.1 Lollipop and comes with several improvements such as new themes and performance enhancements.

Using the new feature called Showtime, you can assign five second video loops to contacts, that would show up in place of a static image when they call you. Several new themes are introduced in the new UI that will show live scores, match scores, etc. directly from the lock screen. Using musical patterns, the users can now unlock the screen. Essentially, you can program a tune as your lockscreen password and you can only unlock the phone if you can play that tune.

The Lock screen also incorporates games. For example, Howzat is a full cricket game in the lock screen. “We’ve already made two cricket themes in India and they both did so well that we decided to do it again but step it up a notch,” says the company.

In addition, it also comes with the weather theme. As the name suggests, the Daily lockscreen will add a new image to the lockscreen daily or you can set it to display an animation of the current weather in your area.

The company says the new MIUI 7 offers up to 30 percent faster response time when launching system apps, as UI promises to be faster and takes very less boot time along with better performance. It also gives a 10 percent increase in battery life for the average user.

The new theme creator tool called Muse allows you to customize the interface the way you want, complete with dynamic content and animations. Xiaomi MIUI 7 comes with over 1500 themes that are available in its store.

For Mi Band owners, a handy ‘Auto Do Not Disturb’ feature turns off notifications when the tracker discovers that you are asleep.

For parents, there is also a feature known as Child Mode that allows you to place your apps on a white list that your kids can use, while limiting access to messages and emails.

The new Baby Album feature is capable of identifying pictures of babies and sort them in a single folder, so they are easy to flip through or view as a slideshow on your lockscreen.

The company is also bringing its visual IVR service to India, which shows you menu options for more than 50 services when you call their automated customer care lines. On the roster in India are Snapdeal, HDFC Bank, Microsoft, Pizza Hut, McDonald’s and Indian Railways.

You will also find features such as Mute notifications and the Smart SMS filter that groups service messages under the notifications tab. A quick OTP comes with a Copy OPT button, which is a very handy feature.

You can also change the appearance of the icons, menus and other graphic elements using the four new system UI themes. You can choose from Rosé, Pink Blush, Ocean Breeze and High Life.

Xiaomi has also combined Opera Max’s data saving technology, which helps to reduce data usage on mobile and Wi-Fi connections across most apps by up to 50 percent. Opera updated its service yesterday to compress videos on YouTube and Netflix.

Currently, no specific timeframe has been provided for rolling out the MIUI 7 on existing devices. However, any existing Xiaomi phone user can now sign up to be a beta tester on their forums and receive MIUI 7 from August 24 onwards.