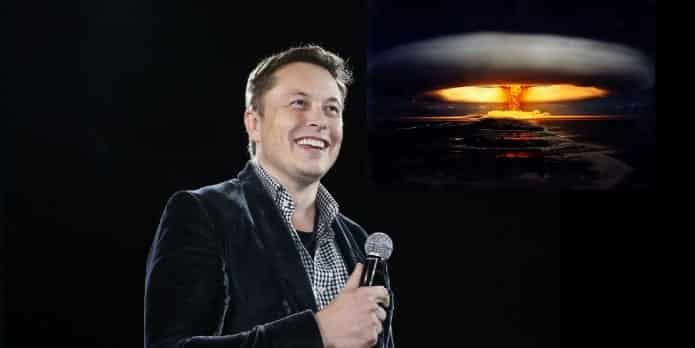 Tesla and SpaceX CEO Elon Musk who appeared on the CBS’ new Late Show with Stephen Colbert to talk about cars and space, said that he has long been fascinated by Mars and shared some of his plans for making it a more hospitable place for humans.

“There’s the fast way and the slow way,” said Musk, who called Mars “a fixer upper of a planet.”

The slow way is to flood the planet with carbon dioxide from Earth to Mars, though that process would take a lot longer.

However, the fast way is much more interesting. “The fast way is to drop thermonuclear weapons over the poles,” said Musk with a completely straight face.

According to Musk, if you drop the thermonuclear weapons on the poles of Mars, it would warm the planet and then trigger a chain reaction that releases carbon dioxide into the Martian atmosphere, which will then continues to warm the planet.

“People have called you the real Tony Stark. You’ve got your finger in so many different advanced technologies,” said Colbert, who was extremely happy to have the tech giant sitting in his studio.

Musk replied that he’s just “trying to do good things.”

“You’re trying to do good things, and you’re a billionaire. That either seems like superhero or supervillain,” countered Colbert. “You have to chose one.”

Though SpaceX reusable rockets has miserably failed recently, Musk told Colbert that his rocket firm, Space Exploration Technologies, or SpaceX within two or three years will be capable of ferrying astronauts to the International Space Station. Currently, SpaceX Falcon rockets has been fairly successful in delivering cargo to the ISS.

Of course, Musk could not get away without talking about Tesla. Colbert, who said he owns one of the electric cars and “loves it,” still managed to make fun of the Snakebot Auto Charger, a metal arm that automatically reaches for and plugs into the charging port of a car when the owner gets home.