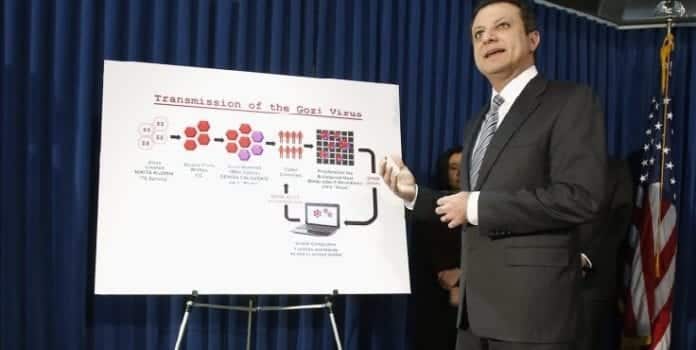 A Latvian man who was charged of designing the Gozi virus code has pleaded guilty. The United States prosecutors have nicknamed this virus as “one of the most financially destructive computer viruses in history.”

“The Gozi Virus has caused, at a minimum, millions of dollars in losses,” states the original indictment.

On Friday, Deniss Calovskis admitted that he was guilty in federal court in Manhattan, according to Reuters, where he had faced up to 67 years in jail before entering into a plea bargain agreement with U.S. authorities.

During his hearing, Calovskis disclosed that he was hired to code the virus which hit 40,000 computers in the US and 190 at NASA, along with computers in the UK, Germany, France, Poland, Italy, Finland, and Turkey.

Though he was arrested in Latvia in 2012, the 30-year-old was was handed over to the jurisdiction in the United States only in February this year. There is no clarity as to whether the ten (10) months he has already spent in jail in his native land would be taken into account by the American prosecutors.

According to the news agency, Calovskis said, “I knew what I was doing was against the law.”

Calovskis was the most skilled of the blackhats involved in the Gozi scam. He was picked up in 2013 along with Russian national Nikita Vladimirovich Kuzmin and Romanian national Mihai Ionut Paunescu, who were said to be behind the Gozi scheme. The virus was first discovered in Europe in 2007 before it widely spread to the U.S. in 2010.

According to the prosecutors, Calvoskis who used the screen name “Miami” had developed the code that altered the looks of the banking websites and fooled victims into revealing personal information like Social Security numbers, a mother’s maiden name, driver’s license information, PIN codes, etc.

The scheme is said to have began in 2005, when Russian Nikita Vladimirovich Kuzmin hired Calvoskis to write code for the virus. It is also claimed that Calvoskis began selling the code to other hackers for $50,000, plus a cut of the profits, said the Huffington Post.

However, in August 2013, Calovskis completely denied of being a part of the Gozi scam.

According to Bloomberg, he said in an interview that “I am like a hostage in this situation with Latvian television. I know about the Gozi virus. I haven’t helped any schemers to get money and I haven’t received any.”

Russian national Nikita Vladimirovich Kuzmin, who is the brain child behind the Gozi, pleaded guilty to computer intrusion and fraud charges in Manhattan in May 2011, also admitted his role in creating the virus. However, his sentence hearing is still being awaited. The other Romanian suspect, Mihai Pauneschu, was arrested in December 2012, but has not appeared in the U.S. for charges.

Sentencing for Calovskis is scheduled for December 14.