A malware revealed by a security researcher at Bitdefender, is reportedly being used by hackers to bypass CAPTCHA authentication on Google play in order to get paid content for free.

Bitdefender Security Researcher, Liviu Arsene has recently revealed that a malware, identified as “Android.Trojan.MKero.A”  has found its way into the highly legitimate apps in Android powered Google Play Store by successfully evading the Google Bouncer’s vetting algorithms. This can cause a lot of trouble for the vendors who provide paid premium services of their products as the malware can now make such services available for free.

To bypass CAPTCHA authentication systems, the trojan redirects the requests to an online image-to-text recognition service, Antigate.com. Since the online service relies on actual individuals to recognize CAPTPCHA images, requests are sent back to the malware within seconds so that it can proceed with the covert subscription process.

After receiving the sent back request, the Trojan interacts with a command-and-control (C&C) infrastructure which loads the CAPTCHA code on the target link, parses an SMS code for an activation , and ultimately subscribe the user to the premium service.The following Image demonstrates it. 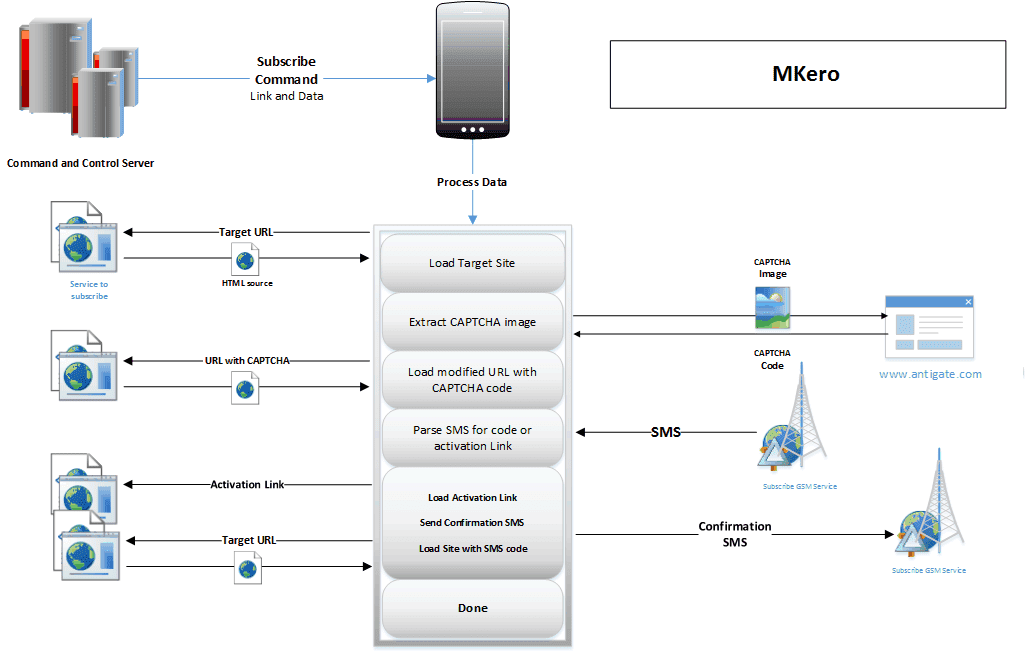 Google Play has been notified of at least seven apps that exhibit this type of behavior, two of which have been downloaded between 100,000 and 500,000 times. Moreover, these seven malware-harboring Google Play applications have been analysed and a list of 29 randomly generated C&C servers names were recovered from a single sample which did not have any encrypted strings. Hence, if any one of these locations became unresponsive –due to a takedown or any other reason – the malware on any infected device will automatically reconnect to the next C&C server in the preconfigured list and proceed with the preset instructions.

The total financial losses have been estimated to amount to a staggering $250,000, which is from the minimum $0.50 charged for sending the subscription SMS messages.