Better iPhone sales helped Apple record the biggest annual profit in corporate history, with record sales of the iPhone helping it to make $53.4bn (£35bn) in the last 12 months. In doing so, Apple surpassed the $45.2bn made by ExxonMobil in 2008 during the time when oil and gas ruled the horizon.

Apple said that after the release of its latest smartphones increased profits by 31pc in its fourth quarter. However it has warned that the growth is likely to slow down significantly in the crucial Christmas period, and sales of the iPad fell by a fifth to their lowest level since 2011.

For the current quarter, Apple has predicted sales between $75.5bn and $77.5bn – as little as 1pc up on the same period last year – partially due to a strong dollar.

However investors are not happy with the news as Apple has been facing questions about its ability to maintain the tremendous growth that propelled it to a $750bn value this year. The prime concern for the investors is slowing down of Chinese economy which in turn may have a multiplier effect on Apple sales. Analysts have also suggested that the Apple Watch, the company’s first new product category since Steve Jobs’ death four years’ ago, has got off to a slow start since launching earlier this year.

Apple though is non-plussed with its critics. It said that the revenue increased by 22pc to $51.5bn in the three months to September 26, the final quarter of its fiscal year. The company sold 48m iPhones, an 22pc increase, during the quarter, which included the first two days that its new 6s and 6s Plus models went on sale.

Apple also stated that Android users are switching to the iPhone at a record rate and this would help it sustain sales for this year as well.

In simple terms, Apple is earning around $1 billion a week. 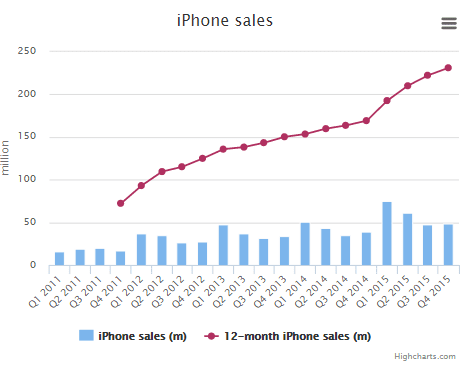 Tim Cook, Apple’s chief executive, said the quarter had been “a very strong finish to a record-breaking year”, and that sales in China, which Apple expects to become its biggest market, had been strong despite recent economic turmoil. “Looking at our sales trends I wouldn’t know there’s an economic issue at all in China,” he said.

As said above, the record numbers announced by Apple failed to enthuse investors and the Apple shares were flat in after-hours trading.