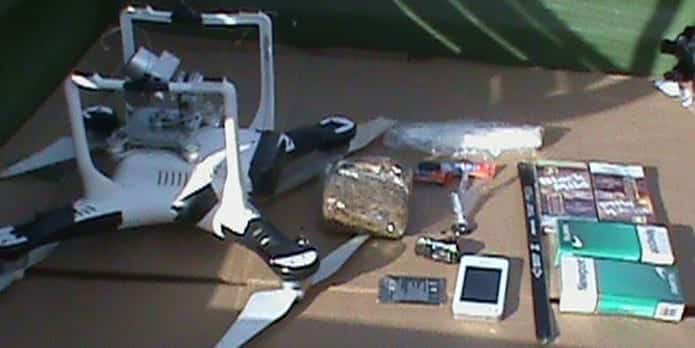 Karma is a B**** ; Drone carrying illegal goods crashes into a prison

First the online retailers got the idea of delivering the buyers shipments through drones and the idea quickly caught on with criminals. For them, drones were the ultimate solution of shipping illegal shipments like drugs, illegal firearms and even smuggled liquor. The drones not only gave the criminals anonymity but were faster and could bypass the law enforcement agencies and their checkposts easily.

However not all crime pays. According to a report from Reuters, a drone has crashed in the Oklahoma State Penitentiary in McAlester. The crashed drone was found to be carrying all manner of contraband, including mobile phones, drugs, and hacksaw blades just to name a few.

The prison authorities were quick to confiscate the illegal goods because of the crash. However it is not known whether the criminals had shipped the goods for some inmate lodged in the Oklahoma prison.

Oklahoma Department of Corrections Director Robert Patton said, “I applaud and commend the quick action and diligence on the part of the staff who noticed the UAV that entered the prison grounds.”

Last year there was a report of a drone carrying a payload of phones crashing before it could make its delivery, which in turn led to the arrest of the drone’s pilot. In fact just a couple of months ago, a similar situation happened in Ohio where another crash foiled the attempts of prisoners to get their hands on contraband.