It seems to have become an habit for Microsoft to release botched patches and updates. On Wednesday, scores of Windows 7 users were left scratching their heads when they noticed a mysterious garbled patch appeared in Windows Update.

Some users even believed that Microsoft had been hacked and hackers had issued the patch to take over their PCs. The reason for the panic was some of the information in the update notification. One URL had a .GOV domain and started with the letters ‘HCK,’ and the notification looked like it was an official Microsoft alert.

Only Windows 7 Pro and Windows 7 Enterprise users received the bizarre patch which described itself as a Windows Language Pack, was said to be 4.3MB in size and was flagged as an “Important” update. Further information like help, and support were filled in with gibberish URLs with “.gov,” “.mil,” and “.edu” domains. 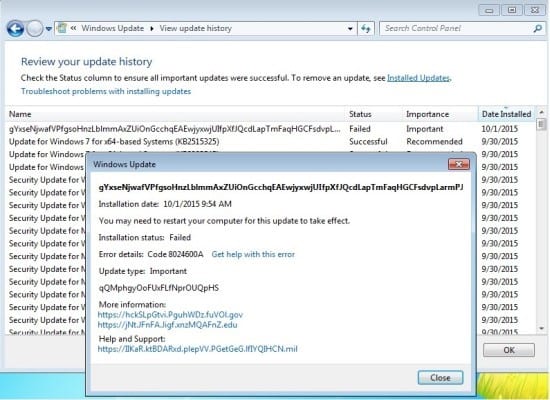 From the above image you can see why the Windows 7 users were shocked about the update. The text and links given in the update would make any user believe that Microsoft’s systems had been compromised and hackers had issued such a patch.

Luckily, none of the URLs seemed legitimate. They were just random characters, and DNS servers turned up nothing.

No, Microsoft not hacked

Immediately after the update was released, exasperated users took to various forums to know exactly what was happening with the patch. Luckily, it was all a misunderstanding. By evening Microsoft came out with a statement saying that the it had released a half cooked patch. It announced, “We incorrectly published a test update and are in the process of removing it.” There was actually no update to install anyway, so it’s all harmless in the end.

So, it seems there was no update.