How it feels to work in such secrecy : Apple’s secretive internal corporate world disclosed by the employees

Everyone knows that Apple works in a very intense and secretive manner which makes us all think what it would be like to work for the company on the inside.

Business Insider have put together the experiences of employees themselves gathered by its own sources as well as from reports elsewhere.

Read below to find out what the Apple employees had to say.

Justin Maxwell was a user interface designer with Apple. He says that the company controls what you talk about with your spouse.

“The measures that Apple takes to protect its creative and intellectual environment are unparalleled in the valley, and it’s been a disappointing experience since leaving there. Apple’s security policy extends to blogs, to speaking engagements, to what we talk about with our spouses. Most people get it and respect it. The ones who don’t — the ones who need to put Apple under their name so they can get a speaking gig at SxSW — are kindly ushered to move on.”

“If I was still at Apple, I would not be responding to this question, nor would I feel wronged for not being able to.”

Knowing the code names, being part of the mystery is exciting!

Justin Maxwell added that, “It’s important to grasp that it’s exciting to be part of this. Knowing that that codename you know isn’t the same codename someone else knows, designed to see who slips up and leaks. Knowing that that thing you’re working on might not be what you think it is at all, only the relevant details of your interaction with it and work on it are what matter. It creates such a huge amount of respect for what the company is doing, internally, and I think people feel good about participating in it.”

Former Apple designer, Chad Little: When Steve was alive, he got what he wanted

“Apple is a pretty divided mix of typical corporate red tape and politics mixed in with startup level urgency when the direction comes from Steve. If you have a project that Steve is not involved in, it will take months of meetings to move things forward.”

“If Steve wants it done, it’s done faster than anyone thinks is humanly possible. The best way to get any cross departmental work done was to say its for Steve and you’d probably have it the same day.”

Former employee of Intel, Richard Francis, who worked on a project with Apple says on Quora:

“The brand is guarded with a zeal that borders on zealous obsession. For instance – I heard (unconfirmed) that all the maple surfaces in all the retail stores are harvested at one particular time of the year in Canada so they all look the same. The store layouts are closely monitored for consistency – often Jobs would go along to the local ones on the West Coast of the US just to ‘observe’ them.”

“Having all these secrets was difficult from my perspective. I couldn’t really engage in idle banter with my colleagues for fear of slipping something out.”

“… I’d scare the engineer by telling them how bad things would be if anyone inside or outside knew what I was going to ask them to do. They would verify with their director, and hopefully be able to fix the relevant problem. We’d slip them some PC hardware if needed or preferably use Virtual PC or the like to be more inconspicuous. They certainly couldn’t tell their co-workers about this work.”

“Personally, I didn’t talk either … my close friends and family knew I was working on some secret project but they didn’t find out what until Steve himself made the announcement. Apple had total control of the message. The secrecy paid off big time for the company.'”

In order to track leaks, Apple makes grammar and punctuation changes in its internal documents

The company started transforming its internal communications to help it find the source of leaks, after Business Insider obtained a couple of leaked memos from retail chief Angela Ahrendts. Now, in the hope of tracking leaks back to the source when those memos are quoted in the media, the company sends differently worded memos to different sections of the company.

Speaking to ZDNet, the former CEO of Flash memory company Anobit, which was acquired by Apple, said:

“They say that Intel is full of paranoids, but at Apple, ‘they’ really are after you.’
At Apple, you have to run ahead just to stay in place, and there are very high expectations of everyone. Apple expects everything you do to be amazing.”

Don Melton was the former director of internet technologies. He did a podcast in which he described Apple’s insane work schedule:

“Sunday is a work night for everybody at Apple because it’s the exec meeting the next day. So you had your phone out there, you were sitting in front of your computer, it didn’t matter if your favourite show was on.”

Luis Abreu: ‘We don’t waste time with the dumb’

Luis Abreu, an UX designer had to go through an extremely demanding job interview process that failed to get him into Apple. He described it on his blog:

“3 screening calls, 5 FaceTime interviews, a trip to Cupertino for 5 two-person interviews lasting a whole day and a lunch at the newest Café Macs.
In the end, I got a shallow no.”

Ben Farrell: They will harass you in hospital

Ben Farrell, a former Apple employee explained his reasons to quit the company by writing a lengthy, detailed blog post:

“In recent weeks I contracted a nasty incapacitating mosquito born virus and was hospitalised for a short time. However, rather than receiving support, I was emailed a presentation to my hospital bed with a note that it needed to be completed ‘urgently’. Even on the very morning of my wedding I was still being harassed by phone and email to send a report someone had lost.”

Former Apple Designer, Andrew Borovsky: You get feedback from the top

According to Fortune, the highest-level execs would review every aspect of Apple’s business every week:

“From a design perspective, having every junior- level designer getting direct executive-level feedback is killer,” says Andrew Borovsky, a former Apple designer who now runs 80/20, a New York design shop. “On a regular basis you either get positive feedback or are told to stop doing stupid shit.”

Currently, Borovsky is employed with CADRE.

Anonymous: It’s awful, but the food is nice

“Generally speaking it is a pressure cooker and all communication is one directional (guess which way that is).

… Paranoid management, disrespect, constant tension, and long hours sum up most of the real culture in operations … Most of the people in SDM (supply demand management) see it as something they need to suck up for a few painful years after b-school so they can move on to a better gig with the Apple brand on their resume.”

“Like the investment banking of tech. Culture here is strictly top down: any attempt to streamline, impact change, or even discuss a better way to do anything is strictly frowned upon when it comes from the bottom. Work longer/harder, don’t complain or try to fix any of the myriad broken systems or processes, and don’t forget that there are 10 people lined up outside to take your spot (your manager won’t forget).”

“Work here at your own risk. On the upside, cafe food is pretty good and dress is casual.”

Austin Meyer: Working at Apple is like being at war. A fun war

“Being at Apple is almost like what I imagine it would be like to be inside of Boeing during World-War 2: Everything is running at 100% throttle, with knowledge that we are running at 100% of our abilities, and that is enough to guarantee the best product, and guarantee success in the final outcome, but nothing less than a 100% delivery is acceptable. Apple is fighting a War against Microsoft, with a clearly FAR superior product, but with the very clear knowledge that it is a FUN war to fight, that they are clearly WINNING, but that they can NOT slip up even the slightest bit if they want to have ultimate success.”

Andrew Guan, Apple China: It can be like a cult

“I don’t know what’s the internal culture like in the states, in China, it’s pretty insane.
Imagine, on the quarter meeting, manager stand on the table and shouting ‘WHO ARE YOU!’ All the employees raise their hands over the head and answer ‘WE ARE APPLE!”

“They desire and demand a collaborative atmosphere. Your work is peer-vetted — we had to present our work to the team and take feedback.”

“At first I found this a bit disruptive, cause I’m used to working on my own projects in a silo, but at the end of the day, the collaboration ensured a better product. And the work didn’t progress too far without checks and balances.”

Tim Cook gave this explanation for Apple’s secrecy when he was the only COO back then:

“Well, that is a part of the magic of Apple. And I don’t want to let anybody know our magic because I don’t want anybody copying it.”

Anonymous: ‘Everything, and I mean everything, is decided by the marketing team’

“Everything, and I mean everything, is decided by the marketing team at Apple, and 2 reviewers in east coast newspapers. I was shocked and flabbergasted at the role these reviewers had at Apple. As an engineer, I was told to tend to feature requests that were made by Mossberg and party. Scary, and makes me want to sell all my apple stock.”

“Apple is interesting. On one hand, you have ‘Think Different’ propaganda posters all over the wall (you have all seen these ad campaigns and know what they are about). On the other hand, Apple has the strictest rules of any place I have worked. Apple cares about its brand image above all else.” 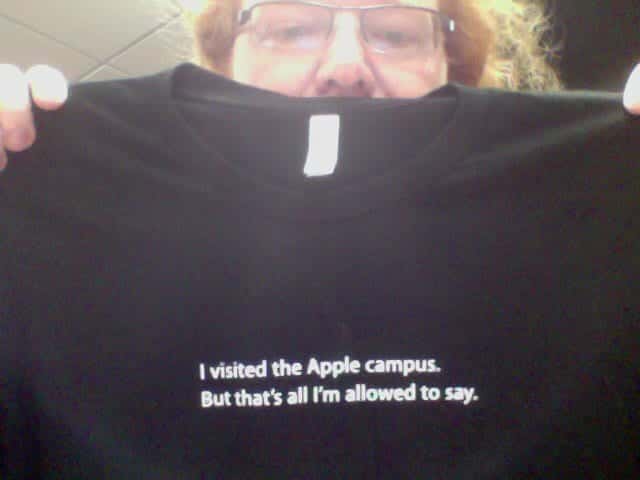