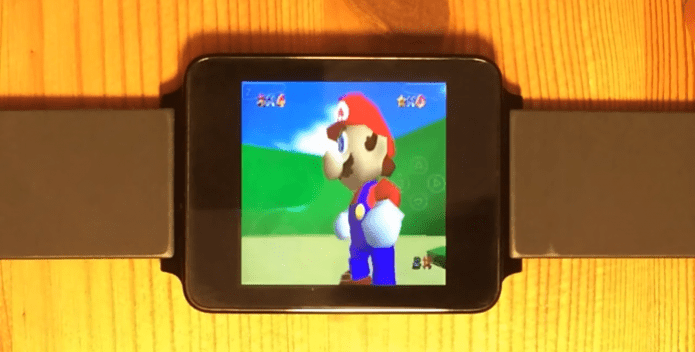 In June 2014, when LG, a South Korean multinational conglomerate, released the LG G Watch, the company visualized people wearing the smartwatch on their wrists to check for time, social media notifications, emails and so on. However, little did they imagine that popular Nintendo games such as “Super Mario 64” and “The Legend of Zelda: Ocarina of Time” could be now played on an LG G Watch using an emulator.

In a video demonstration, Youtuber Hacking Jules showcases his ability to run Super Mario 64 and the Legend of Zelda: Ocarina of Time on an LG G Watch using the N64 emulator. The video also shows how games such as “Half-Life” and “Doom” Nintendo 64 can be played on the wrist and run reasonably fast on an Android Wear smartwatch. Hacking Jules has also uploaded videos of several Nintendo console games running on the LG G Watch W100, including Mario Kart, Pokemon, Pac-Man, Tetris, Super Mario Bros. and Street Fighter II. He has also shared another video showing the PSP game “Monster Hunter Freedom Unite” being played on the LG G Watch.

The LG G Watch is powered by QUALCOMM’s Snapdragon 400 quad-core processor, which provides sufficient power for the emulator to run the Nintendo games. The controls are touchscreen and with a 1.65 inch small screen, the controls seem to be hard to use. The virtual joystick is crammed into the lower left corner of the screen, while the A/B action buttons rest in a tiny corner of the right side of the screen. The framerate also seems to chug pretty frequently.

There is a on-screen directional pad slightly above the action buttons that is so small, which makes it difficult to use them accurately. Also, there are virtual shoulder buttons at the top of the screen. Further, the software is also a bit glitchy, which stutters the game and makes it lag as the player runs from one scene to another.

Despite all these drawbacks, it’s undeniably cool and the fact that Super Mario 64 is now playable on a smartwatch is mind blowing and a great way to relive your childhood memories.