Smartwatch chip that could read the unique, electromagnetic thumbprints of objects discovered by researchers

Carnegie Mellon’s HCI Institute and Disney Research in a new joint research presented a fascinating, patent-pending solution that could find its way to commercial products soon. To be implemented as a small, inexpensive chip that would be installed into any smartwatch, it is called EMSense.

EMSense treats your body as a giant antenna as you touch objects so that it could read their otherwise invisible electromagnetic (EM) signals and “see” what you touch. 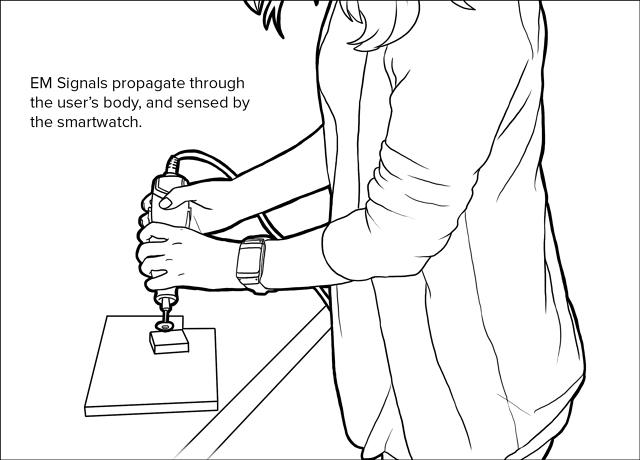 Carnegie Mellon graduate student Gierad Laput says “[Most devices] have EM signatures. But for passive objects like steel ladders—which are conductive—they pick up EM signals from their immediate environment, like fluorescent lights or power lines. Meanwhile, non-conductive objects like pens and plastic chairs are not capable of generating EM signals.”

This means that system can recognize anything capable of carrying out electricity, whether or not it’s something that you plug in. It’s pretty wild technology that builds off of other, still-unbelievable Disney Research projects that involve reading faint levels of electrical resistance, like tablets that can distinguish multiple people, multi-touch houseplants, and microphones that turn your ear into a speaker.

A few practical scenarios were thought of by the researchers for the tech, like you would be alerted of your calendar events for the day when you open your office door in the morning, or your watch would start a timer, when you start brushing your teeth (with an electric brush). To automatically display a step-by-step tutorial on a watch, they even set up a Dremel tool that makes our minds buzz with what this tech could do in a kitchen.

The potential accomplishment in reality here is larger than any single use context or case, since EMSense isn’t making our smartwatches seem halfway useful or just solving a problem in smarthomes. They are basically trying to find a solution to a bigger issue: How does our digital world understand our analog one—without forcing us to demolish and rebuild it, first?