Fleye, a new Kickstarter project, wants to make the world’s safest drone in the form of a spherical flying machine with a camera, with blades covered in the plastic exterior.

Drones are cool, but they can also be pretty scary up close. Don’t believe me? Just imagine four powerful propellers flying straight at your face at full speed. That’s what inspired Laurent Eschenauer, a lifelong tinkerer and professional electrical engineer, to invent Fleye. 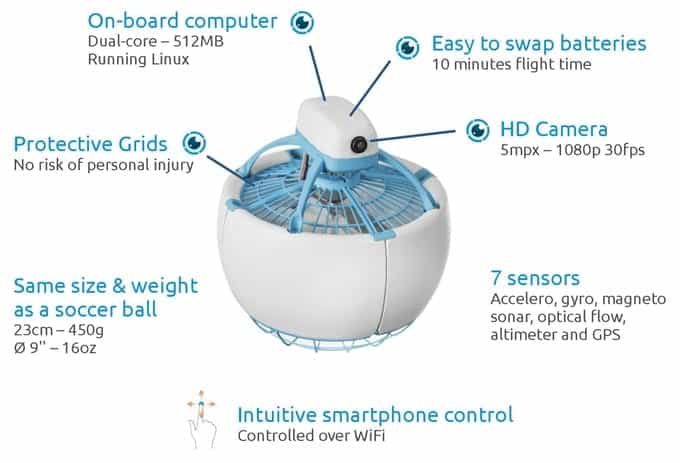 The Fleye will be controlled via an iOS or Android app with four flying modes including selfie, panorama, hover and manual. In selfie mode, the drone will record 1080p video (30 fps) while flying toward you. In manual, you can program a route and the drone will fly it autonomously. It’s even smart enough to react to and avoid obstacles it may encounter along the path.

This little drone is able to accomplish these feats by relying on its Linux-powered, dual-core ARM A9 CPU with 512MB of RAM. It also features two GPUs. The whole 9-inch package weighs 16 ounces. A special, developer edition will also be available with a quad-core CPU and 1GB of RAM for about $1,060.

The Fleye should offer 10 minutes of flying time with a maximum speed of 10 miles per hour, thanks to the 1500-mAh battery. Inside, the ball features a 3-axis accelerometer, a gyrometer and magnetometer. Other sensors included are a pressure based altimeter, GPS and sonar that can track ground distance at up to 10 feet.

The company is making the SDK open to developers, hoping other folks will find specific uses for this camera ball. If the timeline on Kickstarter holds true, units will start shipping in September of next year. If you wait until then, the Fleye may cost $1,270.

here is the demonstration of hover mode.