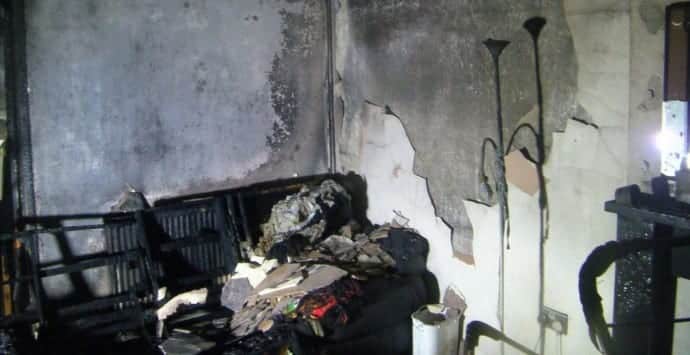 Jibril said he was playing at his nine-year-old friend Tony Chiem’s house in St Mary’s Drive, Wyke, when the board set on fire while charging. The hoverboard had been recently plugged into the socket to charge but once it was removed it began to smoke and eventually caught fire.

“All of a sudden all of this white smoke started coming out of the segway board. Then all of a sudden it explodes and goes boom. My first instinct was to get everyone out alive. There was so much fire and smoke,” he said.

As smoke filled the room and the flames grew bigger, Jibril managed to first rescue his friend’s eight-year-old sister Karen Chiem, who suffered an injury to her foot, from the blaze to the safety of the upstairs bedroom.

He attempted to get out of the front door but the smoke prevented Jibril from being able to find the key to open the door, forcing him to go upstairs. He then went back into the blaze-hit room to find his friend Tony and take him to the bedroom where his sister was.

He then called 999 and followed instructions given by operators and put blankets to cover the bottom of the bedroom door so the smoke would not come through.

“I was about to smash the window open but then the mum came upstairs and managed to open the door,” Jibril said.

Meanwhile, the Chiem children’s mother, Thu Thi Tram, entered the house and led the trio out through the front door. While doing so, Thu suffered burns to her ear. Her husband, Ving Hung Chiem, also sustained a burn to his head as he tried to put the fire out himself before West Yorkshire Fire Service arrived.

Thu, her husband and the kids had to be treated for shock and smoke inhalation at Bradford Royal Infirmary.

The fire came after thousands of hoverboards were seized and some airlines banned them over fire concerns.

Jibril’s father Tariq Majid has hailed his teenage son a hero after he helped rescue the other children.

‘The fire service said to me your son is a hero. His actions saved those children’s lives. They could have all died in this fire. I remember arriving at the house. I had no idea what had happened or if my son was alive. I could not quite believe what was going on. I am just happy everyone was all right.

‘My son is quite a strong character but he has been really shaken by this. He had even contemplated jumping out the window and was going to get the others to jump and he was going to catch them. Jibril was very brave.’

The living room of the house was gutted by the fire – and the rest of the property heavily smoke-logged. The family has been forced to live with relatives.

Following the fire, Mr Majid has called the Costco branch in Leeds, where the Chiam family bought the hoverboard back in November.

He says the manager told him that the particular hoverboard had been recalled and letters had been sent out.

Mr Majid has told them that he wants Costco to cease selling the hoverboard and says they are looking at taking legal action.

He said: ‘You hear about incidents with these hoverboards in the news but no matter what you read, it only hits home when it happens to you. They are innovative and I have had a go on one myself so I know how fun they can be. We just need to make sure that these things are safe.

‘Jibril said it had been charging in the living room and they simple removed it from the socket and it started to smoke before catching fire. They could have been killed. I know all the children believed they were going to die in the fire and still have nightmares.

‘Jibril is waking up during the night and screaming. He said his life flashed before his eyes.’

Local fire station manager Mark Helliwell said: “The children were in the living room when they saw smoke coming from the hoverboard and within seconds it suddenly exploded into flames.

“This must have been quite a scary experience for them. The teenager’s quick-thinking actions are certainly commendable.”

The likely cause of the fire was the overheating of the hoverboard’s lithium batteries said the fire service.

The importers of some models of hoverboards insist their products are safe and compliant with UK and European laws. To ensure that the hoverboard purchased are safe, National Trading Standards advises anyone to use its for the same.