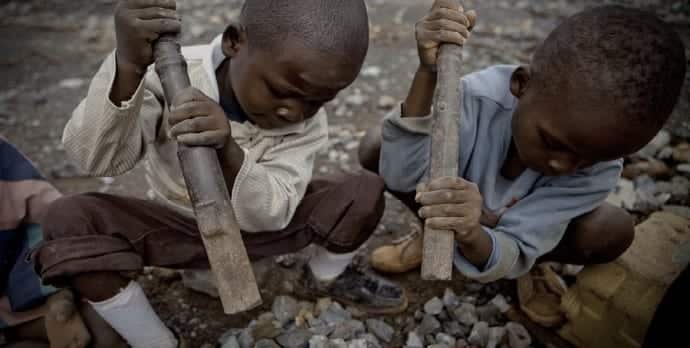 A new report by Amnesty International reveals that child labor is being used in the Democratic Republic of Congo (DRC) to mine cobalt, a mineral used in lithium-ion batteries found in devices from Apple, Samsung, Sony, Microsoft and car manufacturers Daimler and Volkswagen. 50% of the world’s cobalt is mined from the DRC. UNICEF estimates that 40,000 children are working in the mines located in the DRC.

It has been found out that children as young as seven years old are working in cobalt mines to collect the material that’s then being used for the manufacturing of lithium-ion batteries.

Even though the involved companies do not necessarily work with the same battery supplier, the cobalt provider is ultimately the same – Congo Dongfang Mining (CDM), a subsidiary of Chinese firm Zhejiang Huayou Cobalt Ltd, also known as Huayou Cobalt.

The report says that local traders buy cobalt from areas with child labor and sell it to Huayou Cobalt, who then processes and sells the cobalt to three battery component manufacturers — Toda Hunan Shanshen New Material, Tianjin Bamo Technology and L&F Material. They in turn sell it to battery makers who then supply the batteries with this cobalt to technology companies like Apple and Samsung.

Amnesty claims that the company often employ children for as little as 2 dollars per day. It also does not protect employees from the obvious hazards created by working in mines. A working day has at least 12 hours, but some 14-year-olds told Amnesty that there were cases when they had to work up to 24 hours.

Since September 2014, around 80 people have died in cobalt mines in Congo, but the organization says that the death toll could be even higher as the company does not register every victim and sometimes covers up such incidents. Bodies are usually “left buried in the rubble,” Amnesty claims.

Amnesty International spoke with 87 current and former cobalt miners, of which 17 of them were children. “I would spend 24 hours down in the tunnels. I arrived in the morning and would leave the following morning… I had to relieve myself down in the tunnels… My foster mother planned to send me to school, but my foster father was against it, he exploited me by making me work in the mine,” one child was quoted as saying.

Samsung has on record stated that it has a “zero tolerance policy” when it comes to child labor, and routinely checks its supply chain. “If a violation of child labor is found, contracts with suppliers who use child labor will be immediately terminated,” Samsung said in a statement. Sony also released a statement which said that it is working with suppliers to address human rights and labor issues.

This is what Microsoft had to say, “Tracing metals such as cobalt up through multiple layers of our supply chain is extremely complex. … Tracking the origin of the cobalt metal in [the different compounds used in Microsoft products] to the precise mining area is extremely challenging. Due to our supply chain complexity and the in-region co-mingling of materials, we are unable to say with absolute assurance that any or none of our cobalt sources can be traced to ore mined in the Katanga region. To create such a tracing mechanism would require a large degree of vertical and cross-industry collaboration.”

For its part, Apple made a statement to the BBC stating that “Underage labor is never tolerated in our supply chain and we are proud to have led the industry in pioneering new safeguards. We are currently evaluating dozens of different materials, including cobalt, in order to identify labor and environmental risks as well as opportunities for Apple to bring about effective, scalable and sustainable change. As we gain a better understanding of the challenges associated with cobalt we believe our work in the African Great Lakes region and Indonesia will serve as important guides for creating lasting solutions. ”

Every year Apple releases a Supplier Responsibility Progress Report that discloses information discovered in audits of its suppliers around the world. When a supplier is found in violation of underage hiring policies, Apple forces the company to pay the employee to return home, finance an education selected by the underaged employee or their family, continue to pay out wages and offer them a job when they turn of legal working age.

Last year, the company dropped four smelters from its supply chain after they refused a conflict-free audit. In 2014, Apple was put under fire in a BBC documentary that showed the negative working environment of Apple’s supply chain. Following the accusations, Tim Cook said he was “deeply offended” by the allegations and that Apple is continuously working to improve working conditions.

You can check out Amnesty International’s full investigation here (PDF), with more statements to come from involved companies.