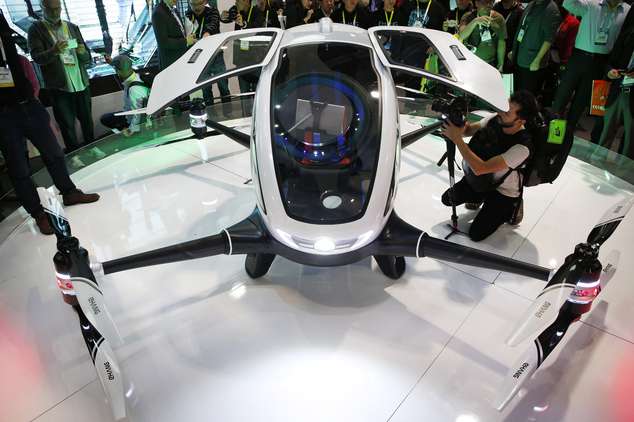 For the longest time, we have heard of drones being controlled remotely, but thanks to the efforts of a Chinese company called Ehang, all that is about to change.

The company unveiled the world’s first drone that can carry a human being inside it and the flying machine was shown off at CES 2016.

The name of the drone is Ehang 184 and has four doubled propellers spinning parallel to the ground, which is similar to the functionality of other drones. The drone will require electricity to function and can be completely charged in two hours.

However, you must be wondering what is the maximum weight this drone can carry?

Turns out quite a bit because Ehang 184 can carry up to 220 pounds of additional weight and fly for 23 minutes at sea level, according to the company.

The drone can only accommodate one passenger, but has additional space to fit in a small backpack and even has its own air conditioning and a reading light. With its propellers folded up, the aerial machine has been designed to easily fit in a single parking spot.

However, the drone will still function on commands because as soon as the individual sits inside it, he will have to take control of the drone through voice recognition functionality which involves two commands: ‘take off’ and ‘land’.

While this is a major breakthrough in technology, this piece of hardware will definitely not go under the nose of U.S. authorities, who will probably decide later on if the drone will be able to fly with a human being present inside it, in the country’s own airspace.

Now here is where the scary part starts. The passenger will have no control over the aerial machine and in case there is a problem, a backup will be in the form of a remote control center that would take over the vehicle and ensure that it lands safely.

While a passenger who will sit inside the vehicle for the first time will be nervous knowing that he or she will not be able to control the vehicle, Chief Marketing Officer Derrick Xiong has provided some sort of comfort by saying that the drone has been flown more than a 100 times at low altitudes and that too in a forested area in Guangzhou, China.

While this is comforting to know, the company will have to release various number of footages before passengers start feeling remotely safe over their maiden aerial voyage.