AMD is proud to announce its FirePro S7150 and the FirePro S7150 x2. Both workstation GPUs are based on the Tonga architecture and are the company’s first ever, fully hardware virtualized GPU products. Both products will be aimed at the virtualization market with key focus on emerging experiences that include the following: 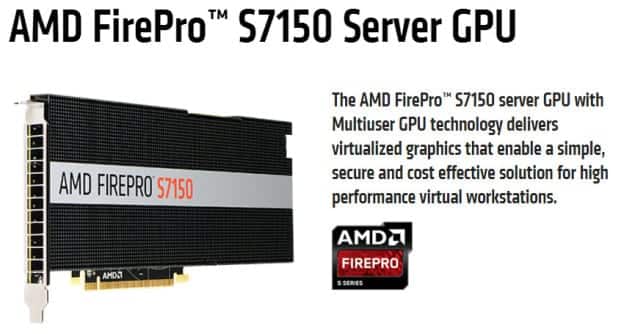 Both graphics processors are based on the 28nm process and the first one, FirePro S7150, features 2048 stream processors (much like NVIDIA’s Cuda cores). The card features a hefty 8GB of GDDR5 video RAM that runs along a 256-bit bus interface, along with TDP of just 150W. Power will come from a single 8 pin power connector. However, its retail price is set at $2399 USD. However, we are still not finished because we still have one more graphics adapter.

Coming to the dual-GPU graphics card, FirePro S7150 x2 features two full Tonga chips. Featuring 2048 stream processors just like the single GPU solution, two GPUs mean that they will equal 4096 stream processors on the PCB and the card itself is packing 16 GB of GDDR5 video RAM on a 256-bit bus interface. As for its TDP, AMD FirePro S7150 x2 comes in a 265W package, and unfortunately for those on a budget, this will definitely not be an option because its retail price has been set at $3999 USD.

AMD stated the following in its blog, summarizing the core features of its newly announced products:

Would you actually end up purchasing one?