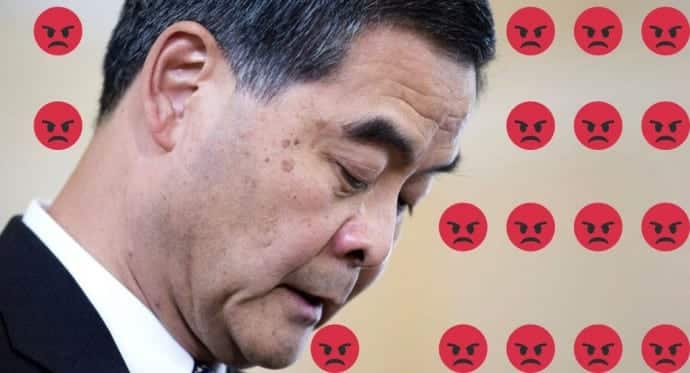 Hong Kong’s CY Leung may have become the first politician in the world to fall prey to the newly launched Facebook reactions buttons. Facebook, on Wednesday, began rolling out the all new reactions buttons instead of the ‘Like’ button.

Unlike the like button, now Facebook users can give a any one of six emotional votes on the posts in their timeline. You can now “love,” “haha,” “wow,” “sad” or “angry” something with cute emojis. You can “wow” a friend’s appalling Tinder screengrab, send them a “sad” for emotional support during a period of anxiety or just “haha” their wack memes in sympathy.

And Hong Kong’s Leung fell prey to the new reactions when thousands of users are showing their dislike clicking “angry” on his official Facebook entries. Incidentally the hate for Leung goes well back as his Facebook posts from as far back as last October suddenly attracted tens of thousands of “angry likes” just hours after the feature was rolled out on Wednesday.

The problem with the new reactions is that, while negative comments can be easily deleted, you are pretty defenseless when it comes to the angry emojis, which are there to stay.

It so happens that Leung is not particularly a liked figure in Hong Kong politics. He was the main antagonist during the the pro-democracy protests that paralyzed Hong Kong for months in 2014. His resignation was one of the key demands of the protesters, many of whom were students. They campaigned for Hong Kong to be able to choose its next leader from an open field of candidates, rather than a small group of pre-selected pro-Beijing candidates.