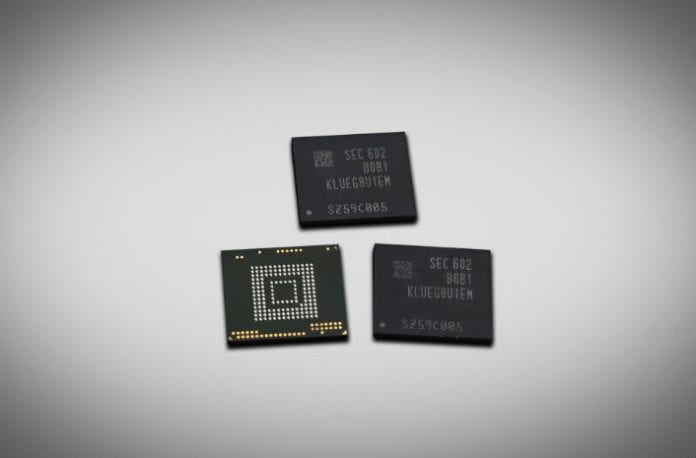 Samsung, which announced its Galaxy S7 and Galaxy S7 edge during MWC 2016 has announced that it is now mass producing the world’s first 256GB UFS 2.0 standard flash memory that are going to be present inside high-end mobile devices. Previously, the largest internal storage found in smartphones was 128GB, but now thanks to the efforts of Samsung, that count is going to increase till 256GB.

“By providing high-density UFS memory that is nearly twice as fast as a SATA SSD for PCs, we will contribute to a paradigm shift within the mobile data storage market. We are determined to push the competitive edge in premium storage line-ups – OEM NVMe SSDs, external SSDs, and UFS – by moving aggressively to enhance performance and capacity in all three markets.”

Much faster than any version of eMMC, these new flash memory are based on the company’s most advanced V-NAND flash memory chips and a specially-designed high-performance controller. According to the statistical data, the new UFS 2.0 memory can handle up to 45,000 and 40,000 input/output operations per second (IOPS) for random reading and writing respectively, and is over two times faster than the 19,000 and 14,000 IOPS, which was the bandwidth reached by the previous generation of UFS memory.

Coming to the sequential reading metrics, an area where flash memory readily shines, the new standard takes advantage of two lanes of data transfer to move data at up to 850MB/s, and keep in mind that the new speeds that are capable of being reached by this type of memory is nearly twice the speeds that you find in desktop and laptops SSDs that use the SATA III interface.

This memory standard from Samsung will be ideal in capturing 4K movies, and playing back those movies thanks to those high sequential read and write speeds. According to additional metrics, 256GB of flash memory will also be able to store approximately 47 full HD movies, allowing you to carry more media in your future mobile devices while you are on the go.

In addition, with the advent of next-generation smartphones that support the USB 3.0 interface, users will be able to transfer data much faster between mobile devices. The USB 3.0 interface will allow sending a 5GB equivalent Full-HD video clip (average duration of the movie is 90 minutes) in 12 seconds. Within this new storage environment, mobile users will get to take full advantage of the performance benefits of Samsung’s latest UFS memory.

Samsung had announced availability of its 128GB UFS memory in February 2015, and in just 12 months, the company has decided to double that storage count, showing how serious the company is in proliferating the amount of internal memory present in a smartphone. However, this could also mean that the company could move away from placing microSD card slots inside its future mobile devices, removing the flexibility factor altogether.

Let us hope that Samsung has good things in store for us as far as mobile devices and their storage is concerned.