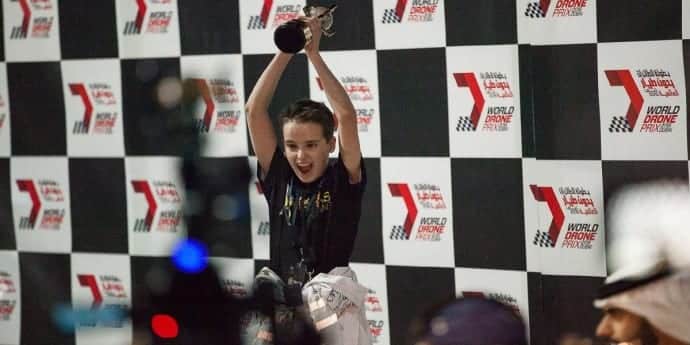 The inaugural World Drone Prix event held at the Skydive Dubai on Saturday night saw a 15-year-old teenager from UK emerge as the winner. World Drone Prix is a new contest that is hoping to take flight both in the west Asian country fascinated by the technology and with sports fans worldwide.

Luke Bannister of Somerset led Tornado X-Blades Banni UK to win a $250,000 US purse, part of $1 million total prize money handed out in the inaugural edition of this race. At the end of the World Drone Prix, a Dubai minister announced the World Future Sports Games will be held there in December 2017, with drone flying as one of its marquee sports.

Those contests next year will include robotic swimming, running, wrestling and car racing, as well as drone flying, as this city of futuristic skylines yearns to be ahead of the curve.

“We are trying to bring the future closer to us,” said Mohammed al-Gergawi, the United Arab Emirates’ minister for Cabinet affairs.

Held for the first time this year, the World Drone Prix tests a drone’s speed and a pilot’s agility, with built-in obstacles and tight turns. The drones are controlled via cameras that stream to goggles worn by the racers, giving them an immersive experience. The competitors fly their drones around a difficult, neon-lighted track, which can shift and rearrange itself that features glowing loops to mark narrow targets. At every round, the racers must try to outpace three other competitors as they circle the 650-yard track 12 times. Drone teams also have navigation choices to make — when and how to handle shortcuts and a “joker lane.” These curve ball rules add to the strategy, and ultimately reward good decision-making skills.

And just like race cars, the custom-built drones have to make pit stops — splatting down on cushions when it’s time for a battery swap. Both the track and the competing drones record live footage from various views.

The Dubai government has gone all-in on drone racing of late, with Sheikh Mohammed bin Rashid Al Maktoum granting $1 million for the Drones for Good Award over the last two years.

After winning the competition, the baby-faced Bannister seemed happy, rocking back and forth on his heels atop the winner’s podium.

“The lights were awesome,” he shyly said afterward, as his team cheered.