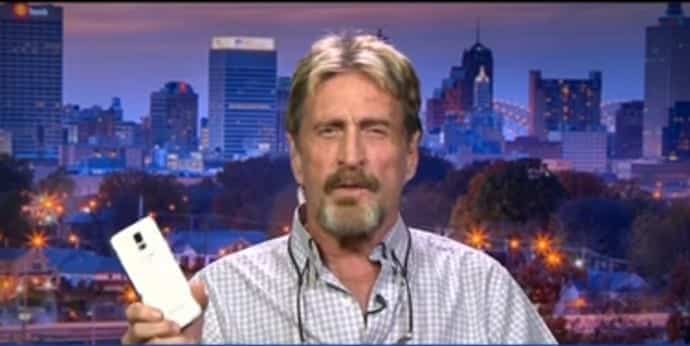 Maverick entrepreneur, John McAfee is in news again. Last month John McAfee publicly offered his services to hack the iPhone.  At that time, McAfee claimed that installing a backdoor would be a bad idea and agreed that it will set a dangerous precedent, so by hacking the iPhone, it will give the FBI what they need without having to install a backdoor. He also claimed to be able to do it in three weeks or eat his socks.

McAfee has now appeared on national television to show the world how how to hack a iPhone.

Basically it involves a hardware engineer taking the phone apart physically, copying “the instruction set, which is the iOS and applications and your memory” A software engineer then runs a program called a disassembler, gathering all the ones and zeroes of inputs “and gives you readable instructions” A coder then reads these inputs and looks for the elements relating to the users PIN. This PIN is then used to enter the reassembled iPhone.

However the Tame Apple Press insists that this is impossible because “iPhones use an encryption system that is designed to stop what McAfee proposes on TV.” Even if it were not finding the PIN number in a sea of binary is tricky.

If you visit the video page, take a peek at the comments. Many Apple fanboys disagreed with McAfee and gave their own version why nitpicking the data from a broken down iPhone was virtually impossible. McAfee, for his part, is certain the method would work.