Intelligence agencies all over the world look to gather information relevant to their various operations, which also includes hacking email accounts. For a while now, Google has been able to recognize such government-backed hackers and alert customers who are possibly affected by it so that they can take instant action.

In order to make the already secure Gmail safer, Google yesterday announced that it will notify users if they are being targeted by a state-sponsored hacker using a new warning. The company said it will also be increasing the visibility of other types of Gmail security warnings to try and help people better protect themselves.

Until now, as many as 1 million Gmail accounts may have been targeted by government-backed attackers disclosed Google. While the search giant did not reveal the exact number, it also did not clarify how it knows when these hacks take place. However, the company did acknowledge that it knows who the targets are.

“Since 2012, we’ve warned Gmail users when we suspect they’ve been targeted by state-sponsored attackers,’ Google said in a blog post. “The users that receive these warnings are often activists, journalists, and policy-makers taking bold stands around the world.”

A pink Warning tab appears on top of Gmail when a hack is detected, advising the affected users to protect themselves in a much better way.

In addition to that bar, Google will now provide full-page warning with instructions about how these users can stay safe. Users may see these new warnings instead of, or in addition to, the existing ones, Google added.

Google says, “These warnings are rare – fewer than 0.1 per cent of users ever receive them – but they are critically important.” In other words, as many as about 1 million users might have received warnings about their email being hacked by a state sponsored hacker.

In recent months, Google has been increasing its Gmail security.

Last month, it introduced a security measure in the form of a small red padlock next to a sender’s email address to highlight if the message is potentially unsafe.

In its security update, one of its recent changes is the expansion of the ‘safe browsing’ notifications.

“Starting this week, Gmail users will begin to see warnings if they click these links, further extending this protection to different web browsers and email apps.”

If users receive a message that cannot be validated, they will also see a question mark where they may otherwise see a profile photo or logo, Google said.

This is what it looks like, so don’t be surprised if you see it in Gmail in the future: 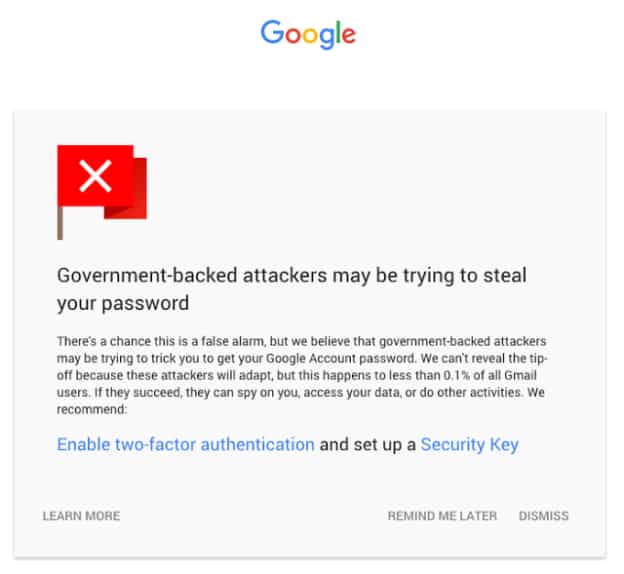 Google said that the amount of inbound mail sent over an encrypted connection increased by 25% from the time they have introduced a visual element to mark unencrypted emails in Gmail 44 days ago,.

To further enhance email encryption, Google has combined with Comcast, Microsoft and Yahoo to submit a draft IETF specification for “SMTP Strict Transport Security.” Basically, Google and its partners want to ensure that encrypted email remains encrypted along its whole route from sender to recipient.

As part of Safe Internet Day, Google announced that it will reward users with 2GB of free Drive cloud storage for those that complete its online security check.

Completing the security check is free and lets Google scan the user’s internet connection to warn them if it sees anything unusual.