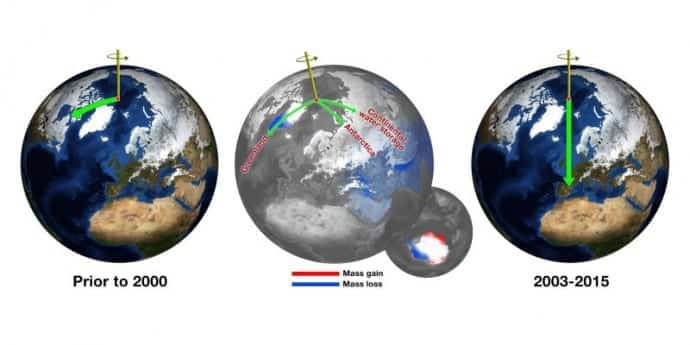 According to a new NASA study, global warming is considered to be the reason behind shifting the way the Earth wobbles on its polar axis. In other words, even as the Earth spins on its axis in a west to east direction, completing a full rotation every 24 hours, that axis itself is also moving. This, in turn, means that the physical North and South poles are actually shifting, with the North Pole now drifting towards the United Kingdom.

Melting ice sheets, especially in Greenland, are changing the distribution of weight on Earth. This has caused both the North Pole and the wobble, which is called polar motion. “If we lose mass from the Greenland ice sheet, we are essentially putting mass elsewhere. And as we redistribute the mass, the spin axis tends to find a new direction. And that’s what we mean by polar motion,” said Surendra Adhikari, a researcher with Caltech and NASA’s Jet Propulsion Laboratory who conducted the work with his colleague Erik Ivins. The study was published Friday in the journal Science Advances.

Explorers and scientists have been constantly measuring the true and precise positions of the rotational poles since 1899 and for almost the entire 20th century they migrated a bit towards Canada. However, that has changed with this century and now it’s moving toward England, said study lead author Adhikari.

“That may seem like a tiny variation, but there is very important information embedded in that,” says Adhikari. “The recent shift from the 20th-century direction is very dramatic,” he added.

Even though a desktop globe always spins smoothly around the axis running through its north and south poles, a real planet wobbles.

Earth’s spin axis drifts slowly around the poles; the farthest away it has wobbled since observations began is 37 feet (12 meters).

While scientists say the shift is harmless, but they must be taken into account to get accurate results from GPS, Earth-observing satellites and observatories on the ground.

Around the year 2000, Earth’s spin axis took an abrupt turn toward the east and since then the motion has shifted sharply and now the North Pole is moving towards the U.K. and Europe. The motion has also sped up, though it still isn’t very large. The movement towards Canada was at around 7 to 8 centimetres per year, Adhikari said, and the movement towards the U.K. is now about 16 to 18 centimetres per year.

‘It’s no longer moving toward Hudson Bay, but instead toward the British Isles,’ said Adhikari.

In the Southern Hemisphere, ice mass loss from West Antarctica is pulling, and ice mass gain in East Antarctica is pushing, Earth’s spin axis in the same direction that Greenland is pulling it from the north, but the collective effect is still not enough to clarify the speedup and new direction. Something east of Greenland has to be exercising an additional pull.

The researchers found the answer in Eurasia.

“The bulk of the answer is a deficit of water in Eurasia: the Indian subcontinent and the Caspian Sea area,” Adhikari said.

The discovery increases the chances that the 115-year record of east-west wobbles in Earth’s spin axis may, in fact, be a remarkably good record of changes in land water storage.

“That could tell us something about past climate — whether the intensity of drought or wetness has amplified over time, and in which locations,” said Adhikari.

Jonathan Overpeck, professor of geosciences at the University of Arizona who wasn’t part of the study, said ‘this highlights how real and profoundly large an impact humans are having on the planet.’

The study’s co-author, NASA scientist Eirk Ivins said Greenland has lost on average more than 600 trillion pounds of ice a year since 2003, which in turn has an influence on the way the Earth shakes.

They all together pull polar motion towards the east, Adhikari said.

Jianli Chen, a senior research scientist at the University of Texas’ Center for Space Research, first endorsed the pole shift to climate change in 2013 and he said this new study takes his work a step further.

“There is nothing to worry about,” said Chen, who wasn’t involved in the NASA study.

“It is just another interesting effect of climate change.”