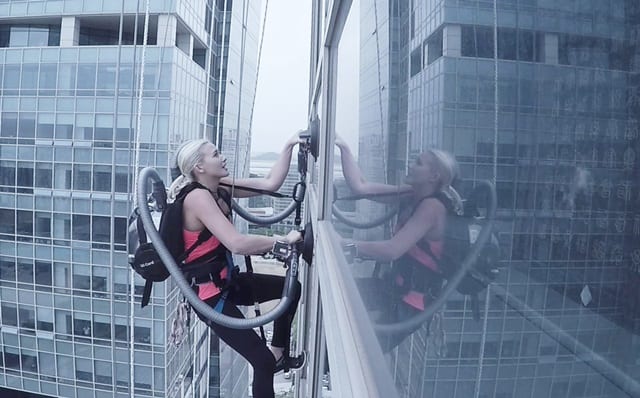 LG has managed to release one of the strongest marketing stunts of all time featuring a famous rock climber called Sierra Blair-Coyle. Just in case you did not know, Blair-Coyle was the winner of the 2015 US Extreme Rock Climbing contest, but on this occasion, she was not attempting to scale a building, but the outside of a glass skyscraper using absolutely nothing but suction created from an LG vacuum cleaner.

The LG vacuum cleaner is a cordless product and for extreme flexibility, the product is powered by batteries. Suction created by the vacuums had to hold their own weight combined with the weight of the climber that equaled a total weight of 70kg. Just imagine, one slip up and the rock climber would have ended up being slammed on the concrete floor.

The rock climber was wearing two of the vacuums on her back with one providing suction to each of her hands. According to LG, she had to turn the vacuum off to allow the suction cup to lift from the glass surface as she moved up. You have to keep in mind that this was no free climb and the climber was harnessed with safety ropes in case the vacuums failed so she wouldn’t fall to her death.

Even though she was supported throughout the entire climb, it appears that activity was rather arduous. There were straps attached to her feet that were in turn attached to the suction cups to give her footholds as well. Looking at the feat that this woman is capable of achieving, it is clear that she is a daredevil.

We will have to wait and see for critics to reveal if the suction power of the LG vacuum cleaner is truly as it appears in the latest marketing stunt, or is LG trying to provide a façade to the crowd that its products are powerful, when in actuality the are not. Looks like we will have to wait on the verdict of these critics.