An intensified smartphone war ahead between iOS vs. Android, as Windows phone exits the market

With Microsoft taking a backseat in its efforts to up the mobile sales over the last 12 months, the sales of its handsets has seen a dip of 73% year-over-year. The void left by them is nowhere seemed to be filled by their hardware partners. During the entire first quarter of 2016, sales of Windows phones from other companies amounted to just 100,000 units, according to Gartner. Therefore, the market share of Windows phone has taken a hit.

Last month, independent industry analysts Kantar Worldpanel ComTech disclosed that sales in Europe’s 5 (EU5) big markets including Germany, France, Spain, Italy, and Great Britain had come down – with overall EU5 market share at 4.8%, down from 9.3% last year and 4.9% last month as sales market saw a drop by more than half in three months.

According to Kantar’s latest report, the market share of Windows phones continues to decline. For instance, Windows sales market share went down from 9.0% in April 2015 (and 6.2% in March 2016) to just 5.8% by the end of this April in Great Britain.

On the other hand, Android increased its share of the British market to 58.5%, and according to Kantar Worldpanel ComTech’s Dominic Sunnerbo, “nearly 10% of new Android customers” were Windows phone owners swapping to Google’s mobile OS.

In the U.S., while Windows phone sales share fell by almost two thirds, Android share increased from 62.4% to 67.6% year-over-year. Definitely, the figures also show that Windows’ share of the U.S. smartphone market has reduced more than half in a single month, falling from 2.7% by the end of March 2016, to just 1.3% in April. 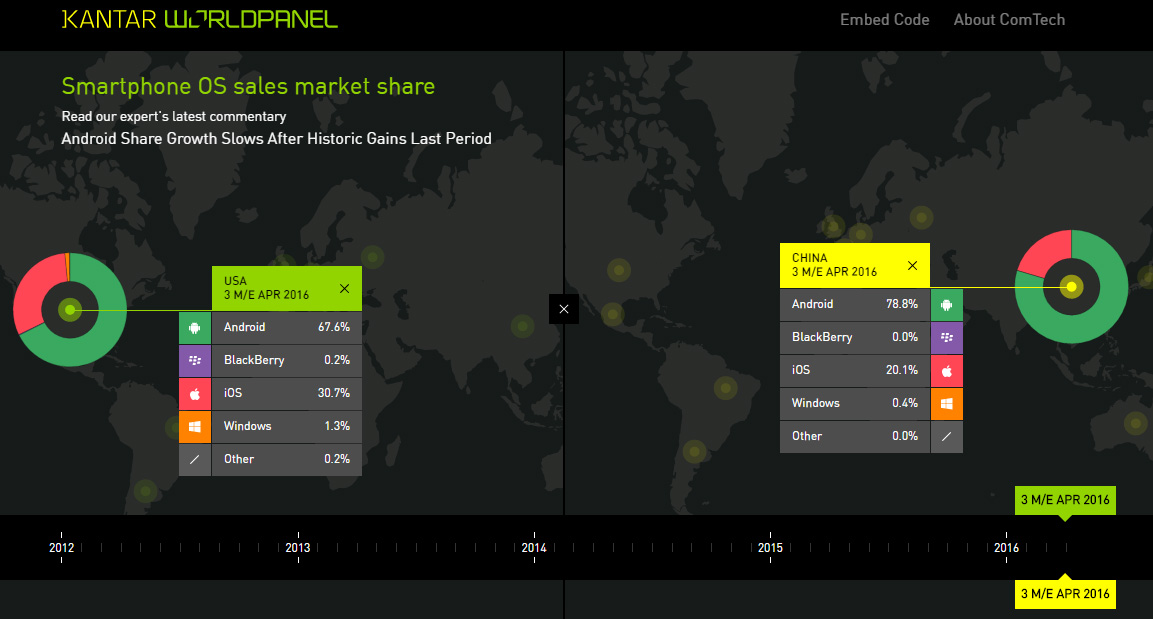 According to Kantar’s Lauren Guenveur, Android buyers in the U.S. are showing more loyalty to the platform:

“While growth in other parts of the world has clearly been a result of movement either from the Windows ecosystem or a feature phone, Android gains in the US are powered by repeat customers. Among those replacing their smartphone, more than nine out of ten (91.4%) of Android buyers owned a previous Android device.”

However, as much as Kantar Worldpanel ComTech is worried, Windows looks very much on its way out of the mobile market.

Guenveur said that “in Europe and the US, the smartphone market is approaching saturation, and future successes for either of the two dominant ecosystems will come chiefly from drawing customers away from the other.”

But she added that “with Windows phones exiting the market, this battle will only intensify.” She said that Android and iOS will now be left to compete head-to-head not only in “new markets where smartphone penetration has not yet peaked, such as India, and Latin America, but also [with] new services and products”.

However, Microsoft says that it is dedicated to supporting its mobile OS “for many years” in spite of its decreasing market share, and very little support until now from its hardware partners in releasing their own Windows 10 Mobile devices.