The United States Department of Justice arrested Artem Vaulin, the kingpin of KickassTorrents (KAT) in Poland on Wednesday and shut down the widely popular file-sharing website. Now, the world’s number one BitTorrent site is back online, thanks to one of the member of IsoHunt. This torrent site has launched an unofficial mirror for KAT. It might look like the original KAT site, but upon a keen observation, it’s just a basic mirror.

IsoHunt is the file sharing organisation, which revived The Pirate Bay in April this year after Swedish government authorities raided its office.

The site, which is accessible at kickasstorrents.website, was setup yesterday and features an older copy of KAT’s database. The IsoHunt team has been hosting files on the KAT mirror only from the last one and a half years, but lacks the forums, community and support of KAT. Having said that, it does have most of the functionality that is needed for a typical torrentor and certainly looks the part.

“It’s not perfect but if users need to save and archive something it’s time. We don’t know how long it can last, but at least it’s something,” the IsoHunt told VentureBeat.

It goes without saying too that uploading of new contents cannot be accommodated by the mirror at the moment as the site is far from being robust, but is certainly functional.

Besides putting the KAT mirror up, IsoHunt has called the arrest of Vaulin another attack on freedom and rights of the internet users all across the world. Therefore, IsoHunt’s team has created two petitions, with Change.org and the White House, with the hope of raising enough signatures to get Vaulin out of jail.

It’s highly unlikely the petitions will be able to achieve anything, but the U.S. government does have a rule that states petitions with over 100,000 signatures in 30 days must receive an official response.

Currently, the Change.org petition has 221 supporters while the White House petition only 69 signatures.

Below is the IsoHunt statement demanding KAT founder’s freedom, which appears the first time you access the KAT unofficial mirror. 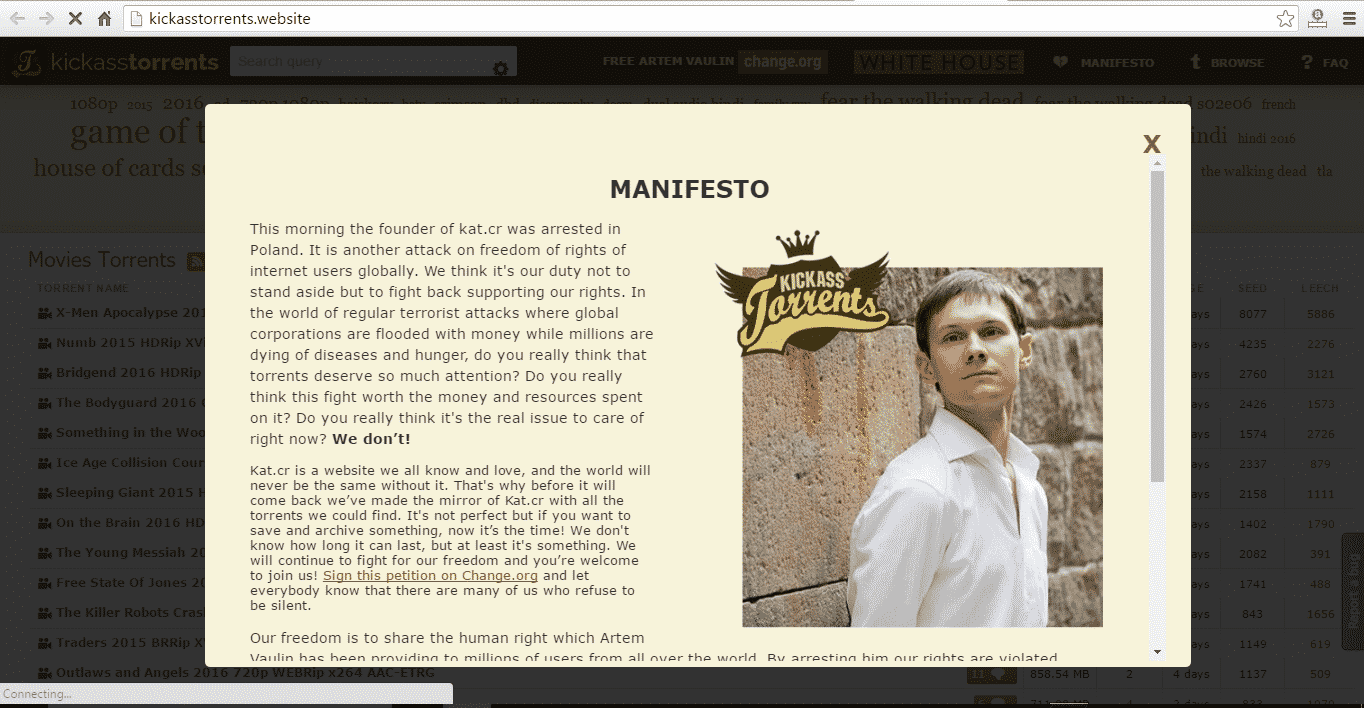 “This morning the founder of kat.cr was arrested in Poland. It is another attack on freedom of rights of internet users globally. We think it’s our duty not to stand aside but to fight back supporting our rights. In the world of regular terrorist attacks where global corporations are flooded with money while millions are dying of diseases and hunger, do you really think that torrents deserve so much attention? Do you really think this fight worth the money and resources spent on it? Do you really think it’s the real issue to care of right now? We don’t!

“Kat.cr is a website we all know and love, and the world will never be the same without it. That’s why before it will come back we’ve made the mirror of Kat.cr with all the torrents we could find. It’s not perfect but if you want to save and archive something, now it’s the time! We don’t know how long it can last, but at least it’s something. We will continue to fight for our freedom and you’re welcome to join us! Sign this petition on Change.org and let everybody know that there are many of us who refuse to be silent.

“Our freedom is to share the human right which Artem Vaulin has been providing to millions of users from all over the world. By arresting him our rights are violated.”