China had unveiled a prototype of a robotic crime fighter known as the AnBot at the Chongqing International Tech Fair this April. This was developed by the National Defense University to enhance the country’s anti-terrorism and anti-riot measures.

Finally, Shenzhen Bao’an International Airport in Guangdong, southern China, which is one of China’s busiest airport, has introduced AnBot to one of its terminals to help with security checks and provide flight information. The droid will patrol the departure hall of terminal three of the airport, reports the People’s Daily Online.

The idea of introducing the robot is to help relieve the pressure off airport police in their daily patrols and save human resources, said the official.

AnBot can work around-the-clock and deter suspects with sound and light, and react to emergencies with an electric riot fork. 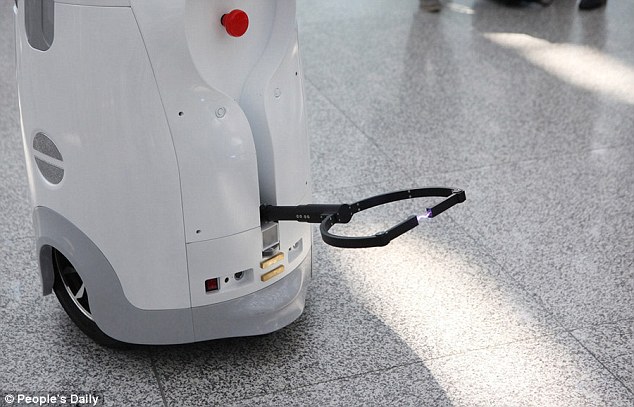 The intelligent guard is 1.5 meters tall and weighs about 75 kg. It can move at a top speed of 11mph (18kph) and can even disarm people if they are deemed a threat.

The security robot is equipped with four high-definition digital cameras, which it can use to snap pictures of travellers’ faces, and then send them immediately to human co-workers for further analysis. It is capable of autonomous patrols, intelligent monitoring and auto recharging.

Xiao Xiangjiang of the National University of Defense Technology said: “It can patrol, avoid obstacles and then charge on its own.”

Robots have been increasingly used in the service sectors such as senior care and domestic cleaning in China.