How about getting paid $650 for trading a MacBook Pro or MacBook Air and get a Surface Book or Surface Pro instead? Does the deal sound exciting to you?

Well, that’s what Microsoft is trying to do. The software giant is hoping to sway you by paying as much as $650 to get rid of your current MacBook Pro or MacBook Air and “trade up” to a new Surface Book or Surface Pro at a Microsoft Store or via Microsoft.com. Microsoft’s Mac trade-in program is yet another campaign in the company’s buyback battle against Apple.

This deal was announced by Microsoft right after Apple’s latest keynote address, where they released the next generation of MacBook Pros. “At this point, they’re really doing customers a disservice to not to have an option for touch on a MacBook,” said Brian Hall, corporate vice president of marketing for Microsoft devices. “We’re going to announce tomorrow a trade-in program so that people who feel disappointed by the Mac not going all the way to touch screen can trade in” their Apple computers for Surface.

Further, Microsoft is also hoping statements like these will persuade you to get a Surface instead: “No device line up can match the performance, portability and versatility of the Surface family” and “If you have a Mac but want to experience the ultimate laptop with on-screen touch, Surface and Microsoft Store are here for you.”

So, how does this trade work? Depending on the model and condition of your MacBook, Microsoft will be offering customers up to $650 in trade-in value as long as the credit is used towards the purchase of the Surface Pro 4 or Surface Book. 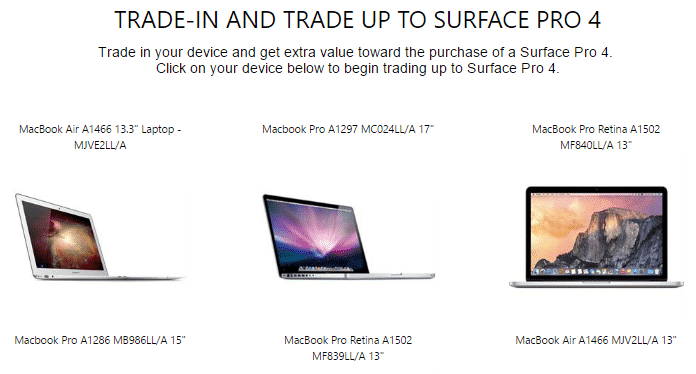 You can follow these four steps to take benefit from Microsoft’s offer (Note: The device should not have signs of wear and tear or should not have been repaired before):