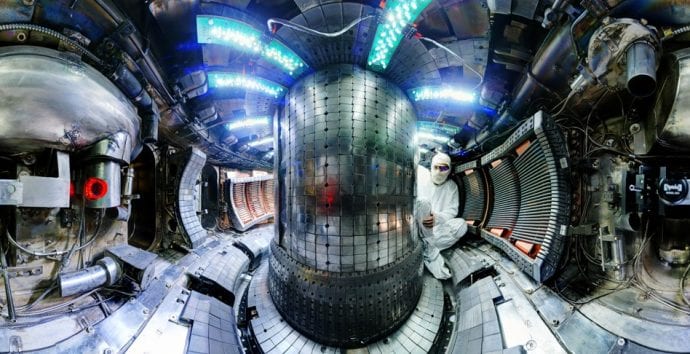 In a major breakthrough in nuclear fusion research, Massachusetts Institute of Technology’s (MIT) fusion reactor was able to produce plasma with 2.05 atmospheres of pressure for the first time. This new record means that the clean and viable energy source is way closer to reality than ever before.

The team of scientists and engineers at MIT’s Plasma Science and Fusion Center set a new world record for plasma pressure in the Institute’s Alcator C-Mod tokamak nuclear fusion reactor. Plasma pressure is the important ingredient for generating energy from nuclear fusion.

During the 23 years Alcator C-Mod has been in operation at MIT, it has repeatedly advanced the record for plasma pressure in a magnetic confinement device. The previous record of 1.77 atmospheres was set in 2005 (also at Alcator C-Mod). The new record of 2.05 atmospheres means MIT improved pressure by around 15 percent.

“This is a remarkable achievement that highlights the highly successful Alcator C-Mod program at MIT,” Dale Meade, former deputy director at the Princeton Plasma Physics Laboratory, who was not directly involved in the experiments, said in a statement. “The record plasma pressure validates the high-magnetic-field approach as an attractive path to practical fusion energy.”

“This result confirms that the high pressures required for a burning plasma can be best achieved with high-magnetic-field tokamaks such as Alcator C-Mod,” says Riccardo Betti, the Robert L. McCrory Professor of Mechanical Engineering and Physics and Astronomy at theUniversity of Rochester.

Out of these three parameters, density, temperature, and time, the plasma pressure is directly linked to the first two. The power you can extract from a fusion reactor increases as the square of the pressure. You get four times the power if you double the pressure.

Alacator C-Mod is a tokamak, one of the two methods in nuclear reactor designs (the other is the stellarator). Tokamaks have donut-shaped chambers where the plasma is confined by strong magnetic fields. They are considered the most promising fusion reactor designs for their safety and reliability.

“Compact, high-field tokamaks provide another exciting opportunity for accelerating fusion energy development, so that it’s available soon enough to make a difference to problems like climate change and the future of clean energy – goals I think we all share,” Professor Dennis Whyte, director of the Plasma Science and Fusion Center and head of the Department of Nuclear Science and Engineering at MIT, said in a statement.

The pressure record just set in C-Mod will likely stand for the next 15 years unless a new device is announced and developed. ITER, a tokamak currently under construction in France, will be approximately 800 times larger in volume than Alcator C-Mod, but it will operate at a lower magnetic field. According to a recent Department of Energy report, ITER is expected to reach 2.6 atmospheres when in full operation by 2032.

Alcator C-Mod operated for 23 years until Congress decided to stop funding it in 2012. They ultimately decided to fund Alcator C-Mod for three more years, a time period that ended September 30, 2016. The Alcator C-Mod facility officially closed down on September 23, 2016, leaving behind a profound legacy of collaboration. The facility has contributed to more than 150 PhD theses and dozens of inter institutional research projects.