ARM, your competition is here and it is definitely fierce

The Intel Atom E3900 series is here and is based on the company’s Goldmont Atom CPU core, and will be catered to drive the IoT market to new heights. The new architecture will allow the chips to run at higher speeds while consuming a small amount of power, which will only result in a better thermal envelop and longevity. The Intel Atom E3900 series will have a TDP roughly between the 6-12 watt range, with the 12 watts of power dedicated to being present inside more powerful IoT devices.

All in all, Intel is going to offering a total of three stock keeping units to improve the IoT market. Just remember that the chips that consume a higher amount of power are not meant to be present inside wearables or other devices that are going to be portable and expect to have a long-running battery time. Instead, the Intel Atom E3900’s powerful chip will be running inside units which require constant power to run. 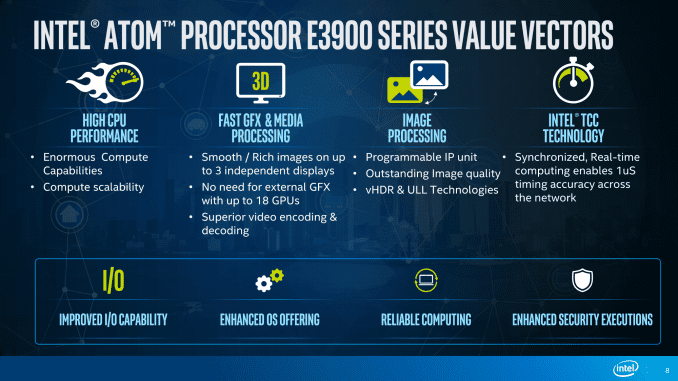 For now, Intel is going to be jumping onto 3 big markets: video/sensor, industrial, and automotive. Since the Atom E3800 could not really compete in these areas due to the lack of processing power, the Atom E3900 is going to make this possible. This is thanks to the Gen9 GPU and some E3900-specific Image Processing Unit (IPU) changes. The latest chip series can support 15 1080p 30 frames per second video inputs, which pretty much means that Intel is free to go after these markets at will. 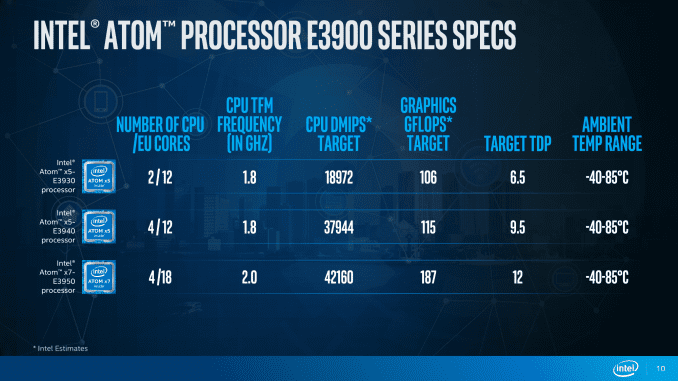 Though the E3800 series had a decent CPU, it is still nothing compared to the Goldmont architecture running the latest Atom E3900 series. Intel has yet to comment on when it plans to roll out these chips, but if they want to get an upper hand over ARM, they should do it with pace.