Popular broadcaster CNN in a recent video has used footage from RPG Fallout 4 hacking mini-game to depict recent, real-life hacks committed by the Russian government. President Barack Obama had recently accused Russia of how it attacked the U.S. in the cyberspace. 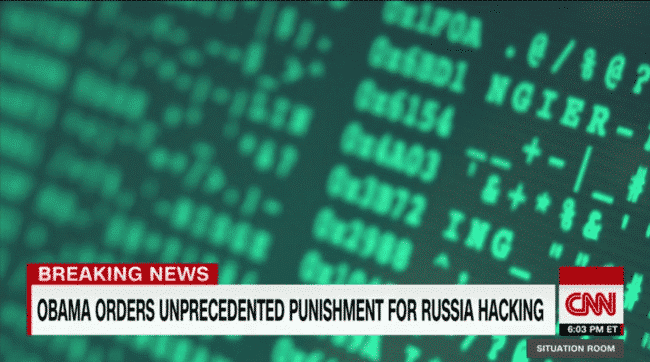 The pictures of the gaffe were posted on social forum Reddit for the first time, which was immediately recognized by the gamers. The screenshot shows the menacing neon green letters from the game. The image depicts a CNN news item that talks about actions taken by the U.S. Government against Russian hackers apparently targeting the United States. In order to graphically represent this development, CNN also used a binary code-like detail.

For those unfamiliar, the game, Fallout 4, as well as Fallout 3 and Fallout: New Vegas is based on players hacking computers in order to gain information or unlock doors and safes. The game is much like a puzzle, wherein the player has to find a word in a mass of letters and characters. Even though it is very similar to hacking, it doesn’t actually imply it.

Said President-elect Donald Trump about the hacking, “I think we ought to get on with our lives. I think the computers have complicated lives very greatly. The whole age of computer has made it where nobody knows exactly what’s going on.” (And apparently, that includes CNN.)

Bethesda, the company behind Fallout 4, has taken the incident in good humour. Studio Vice President Pete Hines tweeted: “Wait till they discover FO4 players were actually helping Russians and cracking real security through that mini game.”

Bethesda Game Studios’ Twitter account joined in by posting an image of one of the terminals, along with the message that it was an early peek at the next season of Mr. Robot.

While the picture is simply used as B-Roll footage, it is not a huge faux pas on the news outlet’s part after all. However, it is still quite amusing when news outlets use video games as footage for real-life news stories.