If you have been following Suchitra Karthik’s Twitter handle suchitraKarthik, you may have been treated to some gory details about sex lives of Tollywood stars. The Twitter handle has been leaking nude pics of various Tollywood actors and actresses like Dhanush, Simbu, singer-composer Anirudh Ravichander, actresses Hansika Motwani, Trisha Krishnan, Anuya Bhagvath, Amala Paul much to the enjoyment of lurid fans following Tollywood.

The handle in question belongs to Suchitra Karthik whose claim to fame is that she is a playback singer and a radio jockey. She has sung over a 100 songs and has pulbished music albums like Music I Like – Suchi, Raja Doli Geeta.

The fun on Suchitra’s Twitter account began yesterday when she leaked vivid and explicit images of Tollywood stars like Dhanush, Simbu, singer-composer Anirudh Ravichander, actresses Hansika Motwani, Trisha Krishnan, Andrea Jeremiah, VJ Divya Darshiniand and other celebritities. The images were very private and confidential and seem to come from a private Tollywood party.

A few hours after the above leaks, Suchitra went on record to claim that her Twitter account was hacked and her rivals were using the Twitter handle to leak the explicit images. However, later in the day, Suchitra leaked yet another set of nude images of actress Anuya Bhagvath. The images are going viral on the internet, and people have been calling out Suchitra Karthik for this low blow.

But after the leak of these private, everyone is now wondering if Suchitra’s Twitter account was really hacked in the first place? Then came a string of NSFW videos today morning confirming that there is more to it than meets the eyes. The Twitter handle today leaked nude videos of actress Sanchitha Shetty. The following tweets in her account also suggests that videos of singer Chinmayi-Anirudh, Dhanush-Amala Paul and Dhanush-Parvathy Nair will be leaked in the coming days.

Sanchita Shetty has responded on twitter via a video saying, “I’m very much aware of what is happening on social media. I want to clarify one thing to my fans and all who love me. Whatever is circulating on social media, the pictures and video, those are not mine. Thanks for your love and support.” 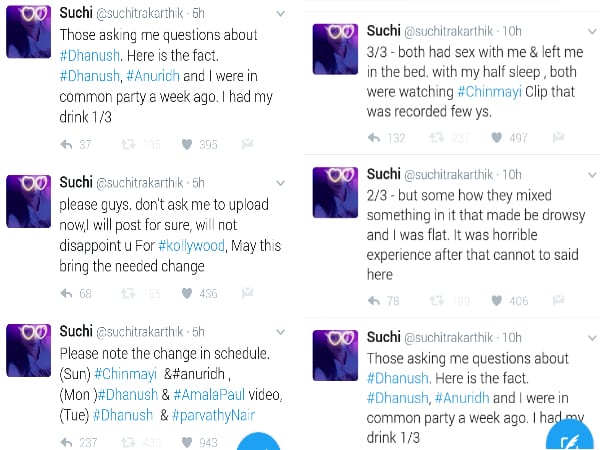 Suchitra Karthik Kumar also shared a schedule when more such scandalous pictures and videos will be released on the internet. A tweet from the singer’s account revealed that another shocking revelation would be made on Monday, March 6, 2017. The nude stills of Siva Manasula Sakthi actress were captioned, “Back on #Leelai.This time #Anya was forced for #Adjustment by a Top Director in one of the movies. Guess yourself who it would be”. This leak made allegations on a dark side of the Tamil movie industry.

We will update you once we get additional information about the new storm raging the South Indian film industry.